Pregnant?  Boy or Girl?  Don’t know?  Throw some spaghetti on the wall; if it sticks…  Or better yet, see how low your belly hangs, that’ll tell ya.  Or if your nails are growing fast and strong, you’re having a…

Okay, okay, these old wives tales may not offer much, but I’ve got something surprising for you–gender-detecting blood tests being sold online.  That’s right, you can find out whether it’s a boy or girl with surprising accuracy by simply purchasing a testing kit online.  And this kit’s no slouch–it accurately determines gender at seven weeks, a full three weeks earlier than conventional gender testing.

Researchers recently analyzed 57 published studies of gender determining blood tests done in rigorous research or academic settings–though not necessarily the same methods or conditions used by direct-to-consumer firms.  The blood tests analyzed use the polymerase chain reaction (PCR) to determine the presence or absence of the Y chromosome, which would signify a male (XY) or female (XX) gender respectively.  The test is approximately 95% accurate

The analyzed test can detect fetal DNA in mothers’ blood. It’s about 95 percent accurate at identifying gender when women are at least seven weeks’ pregnant–more than one month before conventional methods. Accuracy of the testing increases as pregnancy advances, the researchers concluded.  Conventional procedures, typically done for medical reasons, can detect gender starting at about 10 weeks.

The researchers pointed out the need to question couples purchasing the tests to determine what the results will be used for.  Although the benefits of the tests are as screens for genetic illnesses, particularly gender specific ones, there is some concern about couples using such tests for gender selection and abortion. 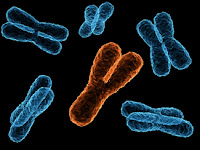 No tests sold directly to consumers, online or otherwise, were actually analyzed; and some doctors interviewed disclosed that they will not provide gender identifying tests, including amniocentesis, for anything other than genetic disease screening.  Companies like Consumer Genetics Inc., based in Santa Clara, CA, sells an “early gender” blood test called Pink or Blue online for $25 plus $265 or more for laboratory testing.

These tests are not available to customers in India–where the costs of marrying off girls has contributed to a cultural preference for boys–or China, which has limits on one child per couple and a traditional preference for male heirs, contributing to abortions.  Consumer Genetics Inc. also won’t test blood samples unless women sign a consent form agreeing not to use the results for gender selection.

Without a doubt, every new breakthrough has a plus and minus associated with it.  As genetic testing becomes more prevalent, we will see more people designing the perfect child for them.  Yes, it will almost always start out as a simple ‘screening’ for genetic diseases, but seriously…how many couples will avoid the temptation of choosing gender, eye color, hair color, skin tone or sexual orientation?  Will some traits be genetically modified out of the species?

Makes me wonder what undesirable…’scuse me, challenging, conditions or traits will be consciously selected out of the gene pool.  Hmmm…could be yours.  Think about it.