Continuing on with obesity, you know, I’ve been hearing quite a bit about hormones and their role in weight gain. It is an indisputable fact that the concentration of some hormones goes haywire as people gain weight. But listen up o’ seekers of truth: Hormone imbalances are a consequence of weight gain (though I am certain they are also maintainers of such), but in and of themselves they are not the cause.

Hormones are chemicals messengers that have a number of functions, one being regulation or homeostasis. Homeostasis is a control mechanism that maintains the balance in a system—it is a universal principle. The peripheral nervous system is made up of the somatic and autonomic nervous systems (ANS), the latter controlling functions that are on auto pilot–the one’s we don’t have to think about. 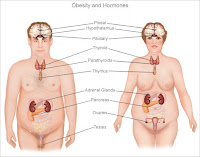 During energy buildup and storage or anabolism—when we extract and store our energy molecules—our parasympathetic system is the driver, controlling various hormones and chemical messengers. During breakdown and utilization (fuel burning) or catabolism—it’s our sympathetic nervous system that’s the driver, with it’s own hormones and neurotransmitters. Parasympathetic prepares the body for build-up (rest and digest), which includes slowing molecular breakdown and energy utilization (sympathetic), increased blood flow to the digestive system, and decreased blood flow to the muscles. When this system is in full force, we often feel relaxed, lazy, maybe even sluggish. Our bodies are ripe for energy storage or weight gain when we are in rest and digest. 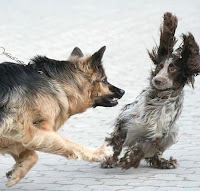 On the flip side, our sympathetic nervous system prepares the body for energy utilization, especially under stressful conditions. Remember it’s the fight or flight system. During sympathetic stimulation, our metabolism speeds up so we burn fuel more efficiently, blood flow to the digestive organs decreases (less food coming in and being distributed to tissues, thus less stored), and muscles perfuse with blood (getting ready to work). It’s what makes you shake and tremble when you are stress or excited, although I am certain some people rarely feel it so strongly.

Okay, we’ll no sh#%…we all know that: It’s harder for obese people to lose weight. No kidding…that doesn’t mean they cannot. The reason this happens is that when fuel keeps coming in as food, the body, in its profound intelligence, does what it’s proficient at: stores it as fat for leaner times, for survival. The body doesn’t understand gluttony; it doesn’t understand prosperity—it doesn’t know 24-hr pizza delivery exists. All it understands is, “Influx of food—store it.” Period. And so that’s what it does.

As a result of overeating, excessive weight gain and very likely low physical activity, the body is forced into this autonomic nervous system imbalance between parasympathetic and under-active sympathetic systems. And a vicious cycle ensues.

Yes it’s the reason obese people don’t see the same gains non-obese people see from short-term exercise…that’s why they’ve got to make it lifestyle, and see what happens after two years of continued activity. Too many obese people quit when they don’t see result within three months.

And, yes, decreasing calories too quickly can lead to a stress that is both mental and physical, one that the body interprets as a need to store even more (“Starvation!”). That’s why I always recommend keeping weight loss to realistic and healthy goals of one pound per week. It’s one thing I like about the Weight Watchers program—they do it slowly and steadily, advocating lifetime wellness and not just a crash-diet (literally and figuratively).

But here’s the skinny: In the end, it still comes down to calories in (and stored) versus calories burned. It’s just that the hormonal changes that DO occur—the ANS imbalance—slow things down that much more for the obese person. In the end, though, part of the answer is still to exercise regularly and effectively, as well as change eating habits (see last post).  There is, however, one more obstacle that is probably the biggest hump when it comes to losing and keeping off weight, and one which I will be discussing in the next post—the human mind.