Put down that can of Diet Coke, dear reader.  It can be harmful to your health. So says a study conducted earlier this year, that showed diet soda drinkers to be at an increased risk for stroke.

Some believe that by drinking the diet variety of soft drinks, they bypass the harmful effects of sugar, thereby making a healthier choice in their beverage selection. But many of us have suspected that diet sodas have hidden harms, despite the inability of nutrition researchers to find them. Some recent studies, however, have shown that diet soda drinkers not only gain weight, but they do so even more than drinkers of regular soda. Doh! And now stroke. 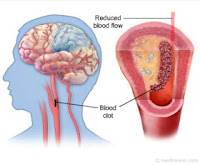 Researchers followed 2,564 people in the large, multi-ethnic Northern Manhattan Study (NOMAS). They collected soda drinking habits and followed the subjects for 9.3 years on average. They found that people who drank diet soda every day had a 61% higher risk of vascular events than those who reported no soda drinking. Researchers accounted for participants’ age, sex, race or ethnicity, smoking status, exercise, alcohol consumption and daily caloric intake. And even after researchers also accounted for patients’ metabolic syndrome, peripheral vascular disease and heart disease history, the increased risk persisted at a rate 48% higher.

Researchers believe the reason for the increased stroke risk has to do with sodium intake. A separate study showed that an increased intake of sodium also increased the risk of ischemic stroke (when a blood vessel blockage cuts off blood flow to the brain). Diet sodas contain between 35 and 40 milligrams of sodium per can. Not a massive amount by any means, but when multiplied by the numbers that many individuals imbibe in one day, and the sodium intake starts to approach dangerous levels. 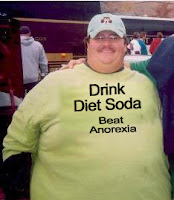 The second study showed that individuals who consumed more than 4,000 milligrams of sodium a day had twice the risk of experiencing a stroke when compared to individuals with an intake of less than the recommended limit of 1,500 milligrams of sodium per day. Only a third of participants met the current U.S. Dietary Guidelines for Americans that recommend daily sodium intake fall below 2,300 mg, or about a teaspoon of salt. Only 12% of subjects met the American Heart Association‘s recommendations to consume less than 1,500 mg a day. Average intake was 3,031 milligrams.
Well I’m sure you can imagine me shaking my head in contempt. I just don’t have tolerance for the liquid sugar habit picked up by the majority of Americans. If you can’t see the writing on the wall–sodas (both regular and diet) cause negative health consequences like obesity, diabetes, rotten teeth and now stroke–then so be it. But stop thinking that diet soda is a healthier alternative to regular soda, because it’s not.