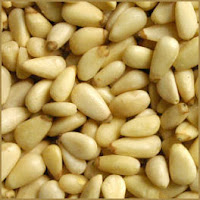 The FDA has issued a recall on Turkish pine nuts from bulk containers at Wegmans Food Markets, and also food items such as pesto, salads or baked goods that may have been prepared with the pine nuts.  Agency officials report that the pine nuts are imported from Turkey, and have sickened at least 42 people with Salmonella in seven states including California, Maryland, New York, New Jersey, Pennsylvania, Virginia and Washington.  Two people have been hospitalized for salmonellosis.

The CDC has reported 42 people sickened in five states–Maryland, New Jersey, New York, Pennsylvania and Virginia–and implicated pine nuts purchased in Wegmans bulk bins and prepared foods that included Wegmans pine nuts as an ingredient as the source of the outbreak.  The CDC mentioned Caprese salad and asparagus with pine nuts sold at Wegmans stores as possibly being contaminated with Salmonella.

A recall by the Wegmans grocery store chain was limited to 5,000 lbs of pine nuts sold in the bulk foods department of most of its stores in Maryland, New Jersey, New York, Pennsylvania and Virginia between July 1 and Oct. 18, 2011.  The CDC said labs in Virginia and New York have isolated the Salmonella Enteritidis outbreak strain from retail samples of Turkish pine nuts collected from a Wegmans store and from pine nuts and homemade pesto at outbreak victims’ homes.  Federal, state and local health authorities are continuing to use the national PulseNet monitoring system to identify other reports of Salmonella infection that may be part of this outbreak.

As I’ve reported in this blog, we’re seeing increases in the number of food-borne illness every year, and they will continue to rise.  This latest recall of pine nuts on the heels of a cantaloupe listeriosis outbreak that has been the deadliest in modern U.S. history.  As of this writing, the 26-state outbreak is still in effect, and it might be some time before we can assess the final damage.  But, I digress–today, we’re talking pine nuts.  Make sure to check your cupboards for the Wegmans brand, and if you unsure…toss ‘em.  It ain’t worth the puke.