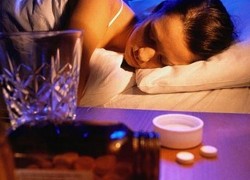 Bad news for seekers of sleep-help: Sleeping pills increase the risk of death, and the risk of developing cancer. A new study discloses that regular users of sleeping pills are four more times likely to die than people who don’t take them, not a good thing considering 5-10% of the U.S. adult population is said to be taking pharmaceutical sleep aids.

To add insult to injury, those people taking the highest doses of sleeping pills had the highest risk of developing cancers, including those of the esophagus, white blood cells, lung, colon and prostate. Although many potential explanations exist for the increases in cancers, preexisting health conditions was not one of them, leading one to conclude that the association to sleeping pills is meaningful.

Saying that, causation was not found in this study, only that there was an association between taking sleeping pills and increased cancers and death. In other words, it is not definite that the cancers and deaths were caused by the sleeping pills themselves. Equally likely is that people on the verge of either illness or death might have a disrupted enough sleep to warrant help. In fact, sleep problems are often the first to appear in medical or psychological conditions.

Dr. Daniel Kripke of the Scripps Clinic Viterbi Family Sleep Center, in La Jolla, CA and lead author of the study feels pretty strongly about the results, ”For the particular sleeping pills studied, I do not see any time I would prescribe them.”

Other doctors disagree. For example, one Dr. Victor Fornari, director of child and adolescent psychiatry at the Zucker Hillside Hospital of the North Shore-Long Island Jewish Health System in Manhasset, N.Y. says,

“These are safe and effective medications when prescribed by a physician as part of a comprehensive treatment plan. Don’t stop taking these medications if you feel that you need them and are taking them with a doctor’s prescription, but be mindful that they shouldn’t be taken frivolously and there are alternatives such as avoiding napping, getting proper exercise, eliminating caffeine and doing other the kinds of things that improve sleep hygiene.”

Good points and good advice from both doctors. Here’s the bottom line: Sleeping pills, like all drugs, have their usefulness. Chronic use, however, is a problem. If you need sleep aids to fall asleep most nights, then something else is going on. And let’s not forget how habit forming these drugs can be–the more you take, the more you gotta take, an so on.

If you are having problems sleeping, do what the good doctor Forni suggests: exercise, eat well, reduce caffeine, avoid naps…but most importantly, keep a rhythm. Nothing in my books leads to sleep disorders faster than an erratic sleep schedule. Do yourself a favor, focus on good sleep patterns and get the rest you need for healthy mind and body. And stay away from the sleeping pills–they’re killers.