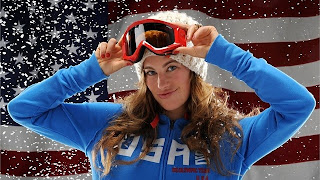 This post isn’t really about ski racing, although it could be. Since I don’t know all that much about the sport, I won’t bore you with my version of its details. No this post is about something else that has caught my attention and has inspired me. A friend recently posted the video below onto facebook (thank you Tim V), and as I watched I observed the sports rehabilitative work that I am so familiar with because I do it everyday. Then I got to hear the words from the engaging athlete in the piece, and I became even more inspired. So this post is about something that gets my hairs standing on end. Hope you enjoy it too.

Resi Stiegler is a World Cup alpine ski racer from Wyoming and the daughter of Olympic champion Josef “Pepi” Stiegler of Austria. Forget that she is a member of my blood tribe, as my mother hails from Klagenfurt, Austria, but what she is striving to achieve, and what she must bounce back from to do it, including the path she’s taking to get there, are all sources of intrigue for me.

If you watch the video, you’ll see that Stiegler had a serious ski injury–leg fractures and ligament tears–laying her up for some time. Recall my recent article on rehabbing my friend from a major motorcycle accident. Unlike Stiegler, my friend had no ligament tears, yet the rehab was still a challenge. The skier, on the other hand, had a number of physical obstacles that she had to address in her rehab protocol, making it that much more challenging.

What really grabbed me about this video is the work Stiegler was doing to stimulate her proprioceptive system–a must in any sports rehabilitation program. Additionally she was challenging her stabilizer muscles by using the exercise ball, practicing yoga (although she makes no mention of it, she is doing a yoga asana in the video), and doing balance work with the additional challenge of playing catch with a medicine ball. She also mentions active release technique (ART), a powerful muscle treatment utilized by chiropractors and physical therapists. In my sports chiropractic practice, Stiegler would have also received a boost from regular chiropractic adjustments.

But her program seems to have worked wonders. Each one of the practices described above is powerful and were all likely contributors to her amazing comeback. Stiegler placed second in the World Cup slalom in Ofterschwang, Germany on Sunday–a career best for her.

Watch the video to see what gets me inspired about the world of sports rehabilitation (and please note some of the things she talks about at the end of the clip, which illustrates the crucial mental component, although she doesn’t talk about it in that way…she’s just living it). Bringing world-class athletes back from injury and competing again is a fulfillment to me like no other. And helping everyday folk get back to playing with their children, being productive at their jobs, and competing in their own hobbies is no less fulfilling. Watch the video to see what I love.