Antidepressants for Every Man, Woman & Child 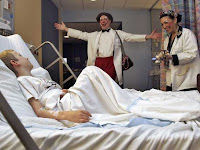 I recently posted on some telling “health” statistics in the U.S. It’s so refreshing to know what Americans are really fighting for with regard to health care, because the strong belief of some is that every American has the right to be on as many drugs as their neighbor. For the mass American mentality–that’s health! Awesome.

Is it me? Do I just not understand health or health care? Are we blessed–part of the “haves”–if we can get antidepressants for our children? Ohhhhh…maybe I’d better go back to doctor school. I thought health and wellness was something else.

According to the CDC’s National Center for Health Statistics study published in September 2011, antidepressants were the third most common prescriptiondrugtaken by Americans of all ages in 2005–2008.

Isn’t that awesome? Aren’t we so fortunate here in the U.S.? Hope Obamacare brings antidepressant drugging to every citizen in the nation, especially children. It’s our right to NOT be sad. Yay, Obamacare!!!

Here go some more stats for you:

I love these statistics. They show how much healthier we are as a result of the mass antidepressant prescription campaign. Thank you Obamacare, for caring so much that you want me and my children to have as many antidepressants as we need. No more sadness for us. We are so fortunate to have real health care in this country; and so fortunate that we may all get even more courtesy of our federal government and caring medical industry. Truly awesome.

4 Responses to Antidepressants for Every Man, Woman & Child