Okay, fish lovers–more sushi news, and not in a good way. Looks like there’s been a recall on tuna, yellowfin to be exact, due to a salmonella outbreak in twenty states linked to the fish. This is a warning to be cautious if you’re out eating sushi over the next few weeks. 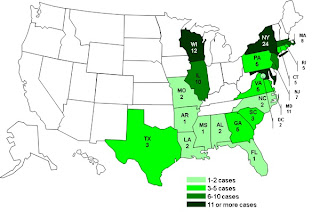 The tuna was sold to groceries and restaurants by the Moon Marine USA Corp. of Cupertino, Calif., also known as MMI, and presumably for making sushi, not for individual consumption. The Northern California fish supplier is voluntarily recalling 58,828 pounds of frozen raw yellowfin tuna that was labeled as Nakaochi Scrape AA or AAA.

Because the fish was sold to groceries and restaurants, many of the people who became ill reported eating “spicy tuna,” said the FDA. The microorganism was Salmonella Bareilly, a rare salmonella subspecies. The illnesses hasve been reported in the following statesand the District of Columbia: 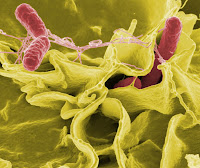 The FDA warns of a 30-day lag time between when people become sick and when cases are reported to health officials. In other words, there could be more people getting sick. Looks like New York, Wisconsin, and Maryland were hit the hardest, with Illinois not far off. The raw yellowfin tuna product may have passed through several distributors before reaching the restaurant and grocery market and may not be clearly labeled.

Symptoms of salmonella poisoning include diarrhea, abdominal cramps and fever within eight to 72 hours of eating the contaminated food. The illness can be severe or even life-threatening for infants, older people, pregnant women and people with weakened immune systems.

So stay away from the spicy tuna, peeps–nuff said.