Whoa, check it: Japanese-American men with diets low in vitamin D had greater risk of stroke later in life. This according to recent long-term study looking at 7,400 Japanese-American men living in Hawaii. Just another confirmation that the sun nutrient, vitamin D, is paramount in maintaining health and wellness.

The study, which began in the mid-to-late-1960s, looked at Japanese-American men between the ages of 45 and 68, and examined and interviewed them about their dietary habits at that time. The men were then followed up with 34 years later, whereby 960 were found to have died of stroke. The men with the lowest vitamin D in their diets had a 22% greater risk of stroke, and a 27% greater risk of ischemic stroke (blood-clot type). No difference existed for hemorrhagic (bleeding) stroke, however. 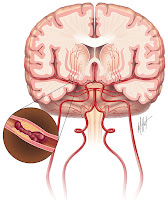 “Our study confirms that eating foods rich in vitamin D might be beneficial for stroke prevention,” said study author Dr. Gotaro Kojima, a geriatric medicine fellow at the John A. Burns School of Medicine at the University of Hawaii in Honolulu. He also stated that it is unknown at this time whether these results could be extrapolated to women or other ethnic groups.

So here I present just another study showing the importance of vitamin D supplementation, and again I ask how there can still be so many “authorities” unconvinced of the need to supplement. True, vitamin D can be found in foods like fortified milk, breakfast cereals, fatty fish and egg yolks, which are all good sources. And, of course, nothing beats the vitamin D production of our skin from the exposure to direct sunlight.

The good doctor Kojima does point out that synthesizing vitamin D from the sun becomes more difficult as people age, so older people especially should increase their dietary intake, and in my opinion take a good D supplement.

Once again, I’d like to point out that many experts, myself included, believe that the recommended blood D levels are too low; and while they may prevent some diseases, like rickets, optimum levels are almost 2-3 times more than the medical and dietary standards.

So Japanese-American men (and all people for that matter) need to get adequate sunlight (15-20 minutes sans sunscreen daily), eat vitamin D rich foods, and supplement. Hey, you can follow the authoritarian naysayers and skip supplementation, OR you can just freakin’ supplement. Which do you think comes with a heavier price to pay if wrong? Well then…nuff said.