Duhhhhh….does soda make you fat? Don’t know…but it might make you dumb. So says a recent study out of the University of California, Los Angeles, which observed what happened when rats were fed a steady diet of high-fructose corn syrup (HFCS), the principle constituent of soft drinks.

Researchers trained 24 rats over a five day period to complete a complicated maze (Barnes maze test, feeding them standard rat chow. They then randomly assigned the rats into four dietary groups: half receiving HFCS as their main beverage source, and half receiving water. Each group was then split into two, those with added omega-3 fatty acids to their diet (rat chow) and those without, so that the four groups looked like this:

All four groups continued receiving powdered rat chow throughout (with or without the omega-3s). The results showed a few interesting things. First, although there was no difference in final weight or size of the rats, the HFCS groups preferred eating the sugar to the rat chow–they must have been American–although caloric intake stayed consistent among all the groups. 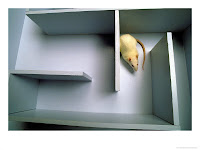 Second, although the rats were found to be in the same initial cognitive condition prior to their special diets, after six weeks the rats that were deficient in omega-3s showed a decline in memory, and thus a reduced ability to complete the maze. Hmmm…. And the results were even worse for the rats deficient in omega-3s and high in HFCS.

But even more interestingly is that the cognitive deficiencies (memory loss) were ameliorated by adding omega-3s to the diet. Whoa!… The researchers conclude that omega-3 deficiency led to a vulnerability of the rats’ brains to the high fructose corn syrup. Fascinating.
“The DHA-deprived animals were slower, and their brains showed a decline in synaptic activity,” said Fernando Gomez-Pinilla, a professor of neurosurgery at the David Geffen School of Medicine at UCLA. “Their brain cells had trouble signaling each other, disrupting the rats’ ability to think clearly and recall the route they’d learned six weeks earlier.”

The researchers believe that the lack of omega-3s caused the brain to become insulin resistant, which would increase the sugar concentration in the blood. This sugar dysregulation then, they think, disrupts the brain’s ability to process sugar, a necessary food source for the brain to process thoughts and emotions.

“Insulin is important in the body for controlling blood sugar, but it may play a different role in the brain, where insulin appears to disturb memory and learning,” Gomez-Pinilla said. 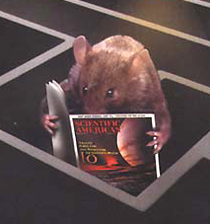 “Our findings illustrate that what you eat affects how you think,” said Gomez-Pinilla.

“Eating a high-fructose diet over the long term alters your brain’s ability to learn and remember information. But adding omega-3 fatty acids to your meals can help minimize the damage.”

So the take home lesson here is two-fold: One, and for me the most important, is to make sure you are getting sufficient omega-3s in your diet. Because the typical western diet is high in omega-6s and low in omega-3s, then supplementing, in my opinion, is the best bet.

And two…HFCS is garbage! I’ve been saying it for over a decade, and nothing’s come along to alter my opinion. The typical American is both omega-3 deficient AND consumes too much HFCS. Think about that if you still can…

2 Responses to Sodas Make Ya Dumb!