As I was sitting around the virtual universe, the topic of orgasm came up, specifically how to know one’s most optimal orgasmic state, and why so many people fail to reach it, let alone know what that state might be. You better believe the right state is necessary to reach orgasm, but men and women have very different physiologies, which dictate how they get there, or whether they get there at all.

Both genders have some clear cut advantages to their sexual expressions, and some disadvantages too. For instance, orgasm in men, for the most part, is hinged on having an erection. It’s the ol’ point and shoot – they mostly come and go together. In other words, to simply be able to do it at all, a man is practically assured an orgasm. Women, on the other hand, can have sex functionally whether in the proper orgasmic state or not (albeit less gratifyingly), and many habitually do just that, over and over again – a number reporting that they enjoy sex, even without orgasm, as intimacy leads to its own rewards.

Obviously the upside for men is that the pleasures of the big-bang are a part of most, if not every, sexual act. For women, though, it takes work—in the form of foreplay (although what we generally mean by this term could actually be the sex act itself)—and sometimes lots of patience. But women can and often do feel a stronger sense of intimacy with the sexual act, whereas the male sex act can, at times, be purely biological. This is likely due to some reproductive realities—like men must ejaculate to procreate, while women need only receive to conceive. By no means does this suggest that women do not love a good ol’ romp for the romp’s sake; and most certainly a big-bang orgasm is equally, if not more, sweet for a woman, but the physiological function between the sexes differs enough to cause these polarities.  All that being said, however, when it comes to anorgasmia (inability to achieve orgasm), women are exceedingly more afflicted than men.

To orgasm, a woman needs to be in the right frame, physically and mentally, as both physiological and psychological stimulation play a role in a woman’s entering the most optimal orgasmic state. Stimulating a woman’s mind is as large a part of reaching orgasm as is stimulating her body; and while not an absolute, it most certainly adds to and aids in the process. Both partners being “open,” mentally and sexually, are enormous enhancers to a woman’s orgasmability.

This is not as easy as it sounds, however: Men and women alike can have mental barriers which may not only affect our sexual performance and orgasmability, but can play a role in how we express our sexual personas (prudishly, insecurely, or overly-aggressive to name just a few), and thus dictate our sexual-life history as a whole. While these mental barriers can certainly become conscious in our awareness, most often they remain hidden away as established mores and norms, beliefs that we tuck aside, accept as reality, and despite their having little substance or validity, submit our sex lives to.  While the variety of mental barriers is large, they belong to a family of seven primary fears, which affect us on a multitude of levels, including sexually.

The seven primary fears that can affect one’s sexuality to such a degree as to obstruct orgasmability are fear of moral disgrace, fear of not knowing enough or being experienced enough, fear of physical rejection, fear of social rejection, fear of inadequacy, fear of disgracing loved ones, and fear of dishonored reputation. While each can be expressed in varying forms, their foundation is rooted in the primary fear itself. I will discuss how each can act as a hidden obstacle to our sexuality, affecting performance and our ability to orgasm. 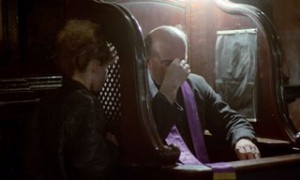 The idea that God is somehow for or against any sexual act is rooted in our moralistic Victorian heritage, when “irregular” sex was condemned.

But not only Christians who can be weighed down by moralistic guilt and shame, any person strongly influenced by a spiritual authority is vulnerable, particularly if that authority views sex outside of procreation a sin. (Part II up next)