2020 A Time To Rebuild What is Mindfulness?

What is The Nature of Reality

There are two primary ways to look at the world: the first is through the lens of materialism. Materialists believe that the universe is purely physical; a tangible reality that can be observed only through the physical senses or tools which are interpreted by the human intellect. A materialist would say that we can observe physical phenomena, measure them, create equations and models to represent these phenomena, and make predictions based on those equations and models. A materialist would argue that we can come to understand the entire universe, over time, by understanding the physical processes underlying it, in the same way we might understand the workings of a machine. If there is something we currently do not understand, it is simply because we do not yet understand the physics behind it. Many current theories fall under this category: The standard model of particle physics, dark energy, quantum gravity, and even consciousness itself.

Materialists are generally secularists in that they do not contemplate or even consider spiritual matters. To the materialist, the universe is made up of physical matter (particles and waves), which is the only substance we can actually measure, and thus it is the sole substance of reality. As such, physical substance is the only thing worth discussing or contemplating – all else is folly. Materialism could be summed up with the line, “Brownian motion, chance collisions and probability are what make up the nature of reality.”

Materialism is the predominating world-view among governments, military, science, medicine, academics and media in the western world today. We see it in every aspect of life – relying on physical evidence by which to base decisions and protocol. It is neither right nor wrong: simply the way agencies set policy, conduct operations, set standards, and provide education. It has not always been this way; throughout history humans have oscillated between approaching the world from a materialist perspective (Ancient Greeks and Romans) to approaching it from a spiritualist one (Middle Ages Europe), and some have even attempted to balance the two (Enlightenment). Today, however, the major institutions of the western world are materialist in viewpoint.

Spiritualists, on the other hand, believe that a supernatural force exists which is beyond physical. While most spiritualists would agree that we are, on some level, experiencing a physical universe, there is something more, a metaphysical reality that goes beyond material substance. The substance in which a spiritualist believes may vary, as some may believe in a dual realm of material and spirit, while others believe there is a third, or primary, substance from which all other substances emerge.  Some even believe that the physical realm exists only in one’s mind; that the true nature of reality is in this primary substance. Some examples of spiritualist philosophies include Advaita Vedanta, Daoism, and monotheistic religions like Judaism, Christianity and Islam. 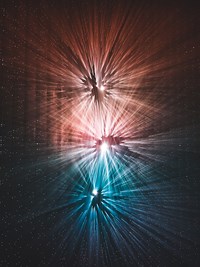 Spiritualists believe that we can transcend the body-mind of the physical world and tap into that something else which exists. This can achieved through meditation and other esoteric practices, rituals and trances, and mind-altering medicinals. Whichever method is used to achieve transcendence, the goal is always to attune to the greater reality. Spiritualists believe that means of gaining knowledge are not limited to physical, or scientific, observation, but also to reason (Enlightenment) and revelation (Judaism, Christianity, Islam). In fact, many other methods are believed to be sources of knowledge, but most importantly, spiritualists do not place a boundary around the physical world and its phenomena.

Spiritualists do not have to subscribe to a particular religion, as some people are spiritual, yet maintain no religious practice. While the modern western world views the world primarily through materialism, most people walking the planet are spiritualists (84% according to the Pew Research Center).  The line which can sum up spiritualism is, “Personality – the subjective perception – is the solid foundation and unifying principle of our existence.”

Neither materialism nor spiritualism is right or wrong – in fact, it does not appear to be a provable matter. They are simply foundations by which one views the world. Many people never even think about their foundation of reality in detail. They simply accept their beliefs without question, sometimes not even knowing how they came upon those beliefs. But for people who have a solid understanding of their philosophical views with regard to the nature of reality, it is easier to understand the decisions they make in life. Other age-old philosophical questions, such as free will are easier to contemplate when one determines how one leans with regard to the substance of the universe. Is the world purely physical, with particles and waves simply bound by physical laws? Or is there something else, regardless of what one calls it, a metaphysical force, which underlies all reality, and which can be tapped into for knowledge, guidance, presence and hope? Think about these questions to learn more about yourself and add a deeper level of meaning to your reflections. Either way, to come to know yourself is the greatest endeavor regardless of how you view the nature of reality. But by solidifying your views, you will come to know yourself more profoundly: what makes you tick, why you make certain decisions, and even where you might be going. Most importantly, your views will underlie the meaning by which you will ultimately evaluate your life: an endeavor worth every bit of energy.