Kabaddi for Long Life and Health 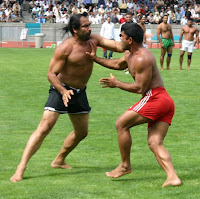 Hot cup o’ tea, hot cup o’ tea…want to get in great shape, South Asian style?  Then hat kabaddi, baby.  That’s right—the sporting craze in Asia is kabaddi, a team competition that originated in South Asia as a form of combat training.*  Participants say they are in the greatest shape of their lives.  What makes it so healthful?  Check it out:

The game is played with two teams occupying opposite halves of a field and taking turns sending a “raider” into the other half, in order to win points by tagging or wrestling members of the opposing team; the raider then tries to return to his own half, holding his breath and chanting “kabaddi, kabaddi, kabaddi” during the whole raid.  The name — often chanted during a game — derives from a Tamil word meaning “holding of hand”, which is indeed the crucial aspect of play. It is the national game of Bangladesh, and the state game of Tamil Nadu, Punjab and Andhra Pradesh in India. ~ from Wikipedia 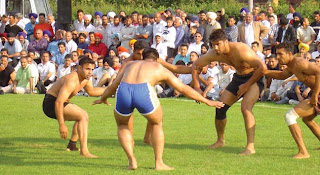 It’s more like an MMA-form of Red Rover, as player do what ever they can to prevent a player from returning to his team.  Players acting as raiders hold their breath the entire time.  So the physical benefits are:

The Indian team coach, Balwan Singh, says kabaddi is the secret to long, healthy life.  “Look at me, I’m 50 years old and I can hold my breath for three minutes.”

Kabaddi seems to be a nice physical outlet for those dedicated to the spirit, too.  Three of the 14 members of Japan’s kabaddi team at the Asian Games are reportedly monks, while five others have graduated from a Zen Buddhist institute.

So if you’re interested in a new form of physical fitness, one that combines combat training with endurance (and taunting), a team sport offering competition, then try kabaddi.  It will kick your butt.

*Not designed by Navy SEALs