Somebody wasn’t paying attention when I said to watch it with those e-cigs. Remember three years ago, I told you about the man who nearly had his face blown off by an exploding electronic nicotine device? Well déjà vu, vapers – a kid in the south-eastern United States had an e-cigarette explode in his face, breaking his neck and burning a hole in the roof of his mouth. James Lauria, a 23-year-old vaper, now speaks with a lisp from the dime-sized hole in his mouth. He suffered first degree burns over his face and fingers. He even burned his cornea (the transparent layer forming the front of the eye).

“It’s just a normal day,” explained James. “I’m at work and things quieted down and I stepped away for a second like I always do. Next thing I know, it exploded and I was on my way to a hospital in an ambulance, and that is the last thing I remember.”

James’ injuries were so severe he was airlifted to the University of Alabama’s burn unit, where he spent a week in the ICU.

“He had burns to his hand and a fractured neck and finger, and burns to his cornea,” said Ed Lauria, James’ father. “It blew a hole through his palate and at the same time, flames went down and he got first-degree burns on his chest and up on his face. It forced his front tooth up into his gum- out of sight -and chipped the other one and damaged a few other lower teeth.”

It’s been six weeks (July 29th) since the accident and James is still on a liquid diet, unable to eat solid foods. His mother, Beth said he will be fitted for a prosthetic for the roof of his mouth

Well dang! If that ain’t enough to make you quit… This on the heels of another recent story that kids are routinely vaping marijuana to avoid the strong smell which accompanies regular pot smoking – probably to toke up at school. 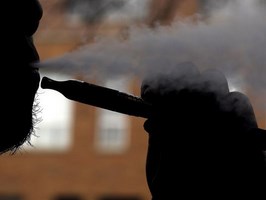 Vape is slang for ‘vaporizing,’ which is heating up a liquid substance, called e-liquid (usually propylene glycol, glycerin, water, nicotine, and flavorings), to the point where it turns into an aerosol, which is inhaled. Some believe that because it is not smoke—with the associated carbon monoxide, tar, and so forth, that it is better (less risky) than smoking. And some have been selling vaping as a way to stop smoking. Uh…yah, ok.

Ok, ok…I get it. But darn it, if you ask me, nothing is worth the risk of blowing your teeth out. Duh-uh-uh-uh-uhhhh! I guess it will have to happen a few more times for knuckle-heads to learn the hard way. But I’ll say it again: If you are going to quit smoking, then quit! Otherwise, just smoke the real stuff, and keep your teeth in place. Gawd…

Watch the video to see James Lauria explain it: