Healthy Habits Are Essential in the Age of Covid

A funny thing happened on the way to the 2020s. Our TV-filled minds and soda-soaked bodies got spun in a real life episode of Black Mirror. I have been writing this blog since 2007, and the primary theme for most of those years has been “mind your health.” I approached this mission from a number of angles. I stressed:

My way, especially in the early years, was to pound that message into my audience, over and over again, perhaps changing the scenario or details of the story, but keeping the main points the same, always. I am big on universals.

It’s also important to be rational – that is, not have expectations that fall outside of reality. Unfortunately, it seems to be the folly of the human mind to place hope in the irrational. While the trait is widespread among us all, it generally operates beneath our awareness. A common expression of this trait is we want to save or eradicate one thing or another – many of which are simply a reality of this world and are neither savable nor eradicatable.

Take death for example. Everyone will tell you that they accept death, and they do, in the long run, without exception. However, when one takes the time to actually think about and assess our underlying views: collectively, people believe we should save life and prevent death at all costs. Our medical system runs with this as its fundamental purpose, and public opinion is often aligned with this sentiment: Nobody should die.

I do not believe this is a bad view. We should want to prevent death in others, particularly our loved ones, because it is a distinctively human trait. We do not need to change the things that make us beautiful as humans. But it does help in keeping bigger events in perspective when we are frank with ourselves. For instance, in accepting that all dynamical events (events moving through time) involving a life form come with an inherent probability of death. In other words, death is a part of life. There is death everywhere, and in everything there is a way to die. We might die from something we enjoy and we might die from something we don’t. There is no predicting it at all, not if you allow nature to be the director.

And, of course, that means the world will have death. We tend to perceive large scale, high probability death events as horrific: War, natural disaster, disease – all tragic, all unnecessary, all regretful. Naturally, as humans we wish to eradicate them all. It would seem absurd, of course, to most of us for the hope of the abolition of natural disasters. There isn’t a soul who fails to get that we have no control over the elements of nature. Yet, surely, the other two are controllable. War and illness are large-scale dynamic events similar to those we consider “natural” phenomena. Human developments are no less natural in how they flow through time, with decision-making and action leading to unfolding events not under individual control. While collaborative efforts can, and certainly do, affect outcomes, they mostly contribute to the flow and unfolding of events more than they “alter” history, as we often perceive, and report on, our heroic efforts.

Understanding these “realities,” as I have already said, gives clarity to our ability to assess larger-scale phenomena. Take Covid-19, for instance: We have had nine-months, maybe longer, to observe and analyze the virus responsible, SARS-CoV-2. We have solid numbers now. Why are we acting irrationally in the face of the facts?

For nine months, I have read, listened, watched Congressional hearings on, discussed and cross-referenced this pandemic. I have heard many arguments on a few different sides, and the conclusions always depend on who is doing the talking. Some people believe we are under-reacting; others believe we are going too far. Animosity is simmering and beginning to roll to a boil. Some have been willing to unleash their aggressions on those they think are either selfish or sheep, depending on their overall perspective. But is it warranted?

I think I have laid the groundwork for an argument which I believe stems from the human propensity to not want others to die. Most of us feel that way on one level or another; it’s understandable, and in my perspective, desirable and beautiful to want others to live. But on the other hand, it seems irrational to continue strict quarantine measures, when the numbers do not justify the reaction.

The two most fundamental characteristics of a pathogen are its contagiousness and its pathogenicity. A pathogen’s contagiousness is how quickly and readily it will spread among people. The SARS-CoV-2 virus is a rapid spreader. This to me is the most relevant attribute of this virus. The pathogenicity of a microorganism is its ability to cause disease. A highly pathogenic organism can cause serious damage – to individuals, yes, but also to populations as a whole. If a pathogen is both highly contagious and highly virulent, there will be enormous death. Yersinia pestis, the causative agent of the bubonic plague, the Black Death, is contagious and highly virulent. If left untreated, the death rate for this pathogen is 70-100%. As a result, it led to the death of over a third of the population of Europe.

How virulent is SARS-CoV-2? As a novel virus – meaning, it is relatively new to us – we could only estimate early on the virus’ pathogenicity, to which we then attributed a death rate. Now, understandably, in the first few months of the pandemic, we estimated high. The numbers were not large enough to approach the mean, and without a doubt, it was wise to be safe over sorry. Death rate [or infection fatality rate more accurately (IFR)] is simply calculated:

As we are now nine or more months into things, the numbers are large enough that we can assume we are approximating the mean (or average). The U.S. death rate, then, using the most current numbers (as of December 17, 2020):

Studies like this one estimate that the actual SARS-CoV-2 infections is anywhere from 3-20 times higher than current confirmed cases. At the low end that would make the death rate

At the high end 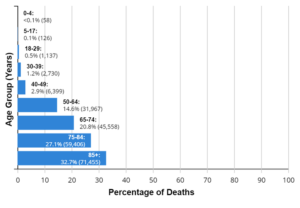 Further, approximately 40% of all U.S. deaths have been in nursing homes. If we were to remove the 100,000 nursing home deaths from the numbers above, the death rate would look like this:

Seen from another angle, the number of people who have been infected and who have survived is as high as 1,999 of every 2,000.

Believe it or not, every one of these Covid-19 death associated illnesses can be minimized by adopting healthy lifestyle habits. It’s amazing how many people get angry at me for stating this fact, that they could actually improve their health, improve their lives, and minimize illness and suffering by practicing simple healthy habits. Eating well, exercising, stretching, sleeping well, addressing emotional stresses, addressing physical pains and injuries wisely, and keeping the drugs, alcohol, and other medications to moderate levels will significantly impact your life for the better. These are simple actions that everyone can adopt, but the reality is that only a small percentage of the population actually does so. People, in general, want easy fixes, which just do not exist in the realm of health and wellness. Fixes which appear to be quick and easy (and that includes many surgeries) almost always come with unwanted consequences (aka side effects). Dying of Covid-19 is one of them.

Listen, the numbers do not lie. What makes things uncertain for the masses is the volume of different interpretations. Granted most people wish to be safe over sorry – I both get that and agree with it. However, you cannot leave your health to chance and then expect a different outcome. It is not too late for the vast majority of people. I have come to understand that only a small portion of the population will heed my words. This article is for YOU – the person who recognizes the wisdom in what I say. Do highly virulent pathogens exist? Yes. Is SARS-CoV-2 that pathogen? Not by the numbers, it isn’t. Despite hearing for months that the death rate would climb to its more accurate number, it hasn’t gone up at all – it has gone down, and in my opinion it will prove to be even lower. Does this mean we should take it lightly? NO! Do the right things for yourself and your family (what you teach them today becomes habit tomorrow). That has always been my message and it will continue to be so – it is universal.