Seven Fears Which Can Hamper Your Orgasm

In an earlier post I discussed the physiological differences between men and women that allows men the potential for orgasm during any sexual encounter in which they can perform. Men are pointers and shooters. Women, like men, have to be physically aroused to climax, but most women also need to be mentally aroused. Yes there are always exceptions, but the rule is that a lover must get into a woman’s mind for her full arousal and the greatest chance at her having an orgasm.

But whatever aids us also challenges us equally, and the mind too can be the greatest obstacle to a woman’s reaching her optimal orgasmic state. In that earlier post I discussed the first of seven primary fears, the fear of moral disgrace, which is based on religious beliefs. This post we will discuss fears 2-4, starting with the fear of not knowing enough or being experienced enough.

This fear is based on our perceived accumulation or deficiency of knowledge. In this case, it is sexual knowledge or experience. Most everybody can relate to moments when they felt inexperienced sexually. The nervousness that rides along with this feeling can be paralyzing, except for the trembling. This fear can lead to erection problems in men, lubrication issues in women, tense muscles, and every other fight or flight, sympathetic nervous system (SNS), response possible. Now while the sympathetics are actually responsible for the ejaculation in men, in women they play a role in the onset of sexual arousal. But here is the interesting thing, a 2000 study on the role of the SNS in sexual arousal among three different female groups—normal sexual function, low sex drive, and anorgasmia—showed that while exercise (an inducer of SNS stimulation) increased signs of sexual arousal in the first two groups, it did the opposite in women who have difficulty climaxing. In other words, women who are anorgasmic will be further hampered by anything increasing tension, including mental states.

Fear of not knowing enough sexually can lead to performance anxiety, where the woman—in her ability to receive without being sexually aroused—becomes a passive spectator in the sexual act, rarely enjoying  her time, seeing sex more as a duty than a pleasure. Despite this obstacle being, in a sense, self-inflicted, it does lead to an overall feeling of non-safety, which, as any woman will tell you, is the killer of sexual arousal. Partners can aid in quelling this fear through reassurance, encouragement and communication of what feels good, what is erotic, and so forth to the one sexually “crippled” with this fear. 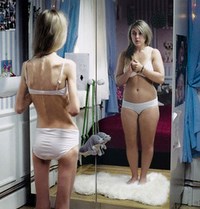 This is perhaps the most obvious fear, as we all have body parts that we both love and despise—this is as true for supermodels as it is for you and me. However, this fear can be extreme enough in some people as to affect sexual performance in men, and sexual arousal—and thus anorgasmia— in women. Too fat, too skinny, organ size, breast size, nipple size, skin blemishes, bad tastes and smells are all areas that can have some people too self-conscious to relax during sex.

If you were to understand that everybody goes into it with areas of themselves they do not love, and that a person is actually in bed with you because of something they like about you, then that helps. If you are too self-conscious to actually enjoy sex, then contact me, because I can show you every reason to love that part of you that you despise. And until you do that, orgasmic sex with another person is unlikely to happen.

“What will people think if I…” Finish the sentence. That is the fear keeping you from experiencing orgasmic sex or life itself. Is it being with someone of a different age (too old, too young), a particular body shape or size (too fat, too skinny, too short, too tall), or a different race? Is it what the neighbors would think if they heard you scream your sexual desires? What your children might think if they find your vibrator? Whatever it is, it’s nothing more than a hang-up. That fat girl just might give you the best orgasm of your life; that young guy could be your key to climax. Screaming might just be the release you need to have an orgasm, and frankly, the neighbors might like it.

Some people believe that if they were to receive and enjoy their sexual pleasures, they might be labeled a slut, or looked upon as a pervert. Some are still afraid to express their homosexuality. Others are ashamed of what they themselves consider deviant. Some people are even afraid their sex partner might be turned off if they let loose, and I’ve got to tell you—I doubt it. I have met and spoken to a lot of people, and most admit they like kinky stuff in bed. We all do! Accept it and start having fun. Believe me, nothing is too weird—if you like it, someone else does too. Promise. A universal. Contact me if you really cannot get past this one.