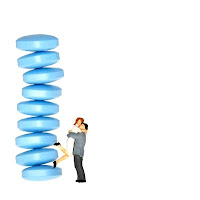 Hey! Listen up!  .  Wha…huh?  You heard me, earplugs—taking erectile dysfunction drugs can deafen you.  Oh…

According to a recent study out of the University of Alabama, Birmingham, there may be an association between the onset of hearing problems and the use of phosphodiesterase type 5 inhibitors (PDE-5i), which includes Viagra, and Cialis.  This has been known since 2007 when the U.S. Food and Drug Administration issued labeling adjustments for these medications to more prominently display warnings about hearing loss risks.  This followed reports of sudden hearing loss that year among users of these drugs.  The current study simply confirms the connection.

The finding stems from an analysis of survey data concerning more than 11,500 men over the age of 40 that had been collected by the federal Agency for Healthcare Research and Quality between 2003 and 2006.
They found that men who said they used PDE-5i drugs had twice the risk for developing hearing loss as those who did not.

Although more studies need to be conducted, scientists believe that it has to do with the original use for the drugs, which was as a medication for pulmonary hypertension.

“PDE-5i medications work in erectile dysfunction patients by their ability to increase blood flow to certain tissues in the body,” said one researcher. “It has been hypothesized that they may have a similar effect on similar tissues in the ear, where an increase of blood flow could potentially cause damage leading to hearing loss.”

Well, for now I guess it’s a choice men have got to make.  Something tells me I know which one will be most popular.  Huh?…