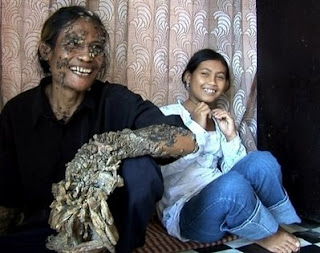 This month’s news of the weird: An Indonesian man, dubbed the tree manbecause of the freakish amount of warts that had formed all over his body, successfully underwent wart-removal surgery to remove the unsightly growths.According to recent reports, Dede, a 37-year-old from rural West Java, had six kilograms (13.2 pounds) of woody growths removed from his body. The warts, so plentiful they looked like tree-bark, started growing when Dede was a teenager. An American dermatologist diagnosed Dede last year as suffering from a combination of depressed immune system, and infection with the human papilloma virus (HPV). His immune system is too weak to fight off the virus. Crazy. Dede has had eight operations so far, and is scheduled for one more to remove an additional 2/3 pound of warts. He is currently being treated with medications and vitamin A to prevent regrowth of the warts.

Warts come in many flavors and are the result of infection with HPV. They can be passed from person to person, but the risk is very small…so don’t freak out by your warty friends (Dede’s wife freaked out and left him). Warts can also be picked up by sharing towels, so I definitely discourage that practice (please make note hosts and hostesses: use papertowels in the washroom when entertaining).

And the treatment to remove warts? There are a few; the most notable (all from Wikipedia):

So if you’ve got warts to rival Dede’s, I guess you’re going to have some fun in the near future–I know, I had a few doozies myself when I was a teenager. Froze them off with liquid nitrogen. Figure it was about the fourth worst pain I’ve ever experienced. So I can’t really imagine what poor Dede went through. But both he and I are wart free…for now.