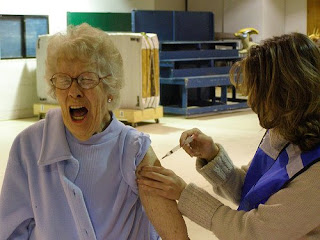 More BS exposed on the flu shot health watch. Despite proponents talking up the countless benefits, seems like research is proving otherwise. The latest study out of Alberta, Canada showed that elderly people getting the flu shot had no lowered risk of dying from the flu. That’s right–no lowered risk of dying from the flu. If I’m not mistaken, that’s always the reasoning behind the heavy marketing of this bogus vaccine.

Over 700 elderly people were followed, half receiving the flu shot. As it turns out, after adjusting for potential confounders, including functional and socioeconomic factors, no statistical significance was found between death rates of vaccinated versus non-vaccinated people. In other words, just as many flu-vaccinated elderly subjects died as non-vaccinated subjects. Now ain’t that a…bleep.

Anyway, that’s no surprise to me. I’ve been pounding out this story for well over a year, and have been screaming foul for the flu shot for as long as I can remember. Plain and simple: The flu shot is bunk! Thank you but no thank you. Even though flu vaccinations among the elderly have gone way up–from 15 to 65 percent–“there has been no commensurate decrease in hospital admissions or all-cause mortality,” said one researcher. All this despite previous estimates that “50% of reduction in death from any cause had been noted in elderly people who got a flu shot.

Oh well, I guess even these results won’t slow down the flu vaccine propaganda. I’ll just keep saying it until it catches on: You’ve got to get sick! It’s the only way your immune system keeps updated and ready to fight tomorrows invaders. The flu shot merely exposes you to a minuscule proportion of existing flu strains. The influenza virus mutates rapidly. Just keep yourself as healthy as you can, and you shouldn’t have any problem beating the antigen off those little buggers.