Not too Late, Boomers My Gift to My Family 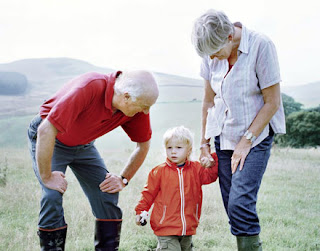 Grandparents are a positive force for families going through difficult times, like separation or divorce. Spending time with grandma or grandpa can help kids with social skills or behavior, especially kids from single parent households, so says a new study published in the February issue of the Journal of Family Psychology.

Researchers from the The Hebrew University of Jerusalem, Oxford, and the University of London interviewed 11-to 16-year olds from England and Wales and found that the more conversations youths had with grandparents, the greater they got along with peers, and the less problems they had with hyperactivity and disruptive behavior. According to the study’s lead author, Shalhevet Attar-Schwartz:


“Grandparents are a positive force for all families but play a significant role in families undergoing difficulties. They can reduce the negative influence of parents separating and be a resource for children who are going through these family changes. This was found across all three family structures, but adolescents in single-parent households and stepfamilies benefited the most. The effect of their grandparents’ involvement was stronger compared to children from two biological parent families.”

These finding have especially strong implications for the U.S. where grandparents are increasingly living in households with their grandchildren. A 2004 US Census Bureau survey found that more than 5 million households include a grandparent and a grandchild under 18, up 30% since 1990.

This is interesting and important information in a country where the divorce rate is estimated to be around 41%. Knowing that grandparents can play such a critical role in the lives of children is enormous, and should place much more value in our older generations; especially since, as people age, they are often devalued by our youth-obsessed society. If you are a single or divorced parent, make sure that your children are spending lots of quality time with the grandfolks–it’ll be healthy for them all.