My Gift to My Family 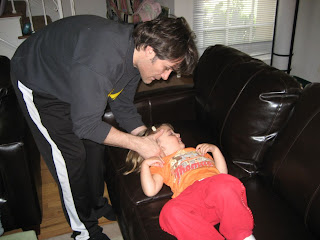 As I’ve been keeping you all updated, Delilah, my daughter, has been sick. She’s got a nasty cold, the one that many of you have probably had, too; you know, runny nose, incessant cough, fever. She has been better–that is, no fever–but the cough has been waking her (and us) at night. She sometimes coughs so much that she throws up. Much of that, I think is because she doesn’t yet know how to blow her nose or clear her bronchioles, so she’s swallowing all the mucus. When she vomits (it’s more like an upchuck) it’s a mucousy spittle.

Anyway, yesterday was pretty bad in that she hadn’t slept but a few hours. The cough kept her up most of the night–it was awful. Since I hadn’t adjusted her in awhile, I thought I’d check her neck. I had her turn her head left, then right–she had way more movement to the right. So we laid her down, and she struggled a bit. I told her that if she’d let me adjust her I would take her to Barnes and Noble at the Grove and we’d get that Gordon the Express Train from the Thomas the Tank Engine series. She let me. Bribery works really well, I’ve found.

So I went ahead and set her up, neck turned all the way to the left (see picture above), and with a quick move–crack!!!–her neck blasted, louder than I’ve ever heard in a child. Then came the tears. But I just reminded her of Barnes and Noble at the Grove, and of Gordon, and the crying lasted for all of about…oh, ten seconds.

I don’t know if the chiropractic adjustment made her cold any better–her nose is still running today (anyway, that’s health in my opinion, but that’s another blog post, altogether)–but I’ll tell you what happened immediately, she started getting sleepy, and shortly thereafter, she crashed. She stayed asleep for about three hours. And when she woke up, no runny nose, great appetite, very playful–I was psyched, to say the least.

Like I said, she’s still battling the cold. Her nose is a little runny, and she coughed a bit last night; but it didn’t keep her up. She got her Gordon the Express Train, and there were lots of smiles along with it. And she got her atlas (C1 vertebra) adjusted, which, cold or no cold, is good for her health. I’m so happy I have this gift to give to my family.

2 Responses to My Gift to My Family