How Thin is Too Thin? Are You A Part of the Disabled Generation? 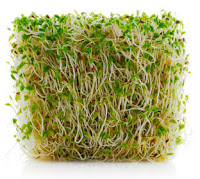 Put those carrot sandwiches down, hippies: your alfalfa sprouts might be contaminated. The Food and Drug Administration (FDA) and the Centers of Disease Control (CDC) has issued a warning that raw alfalfa sprouts may be contaminated with salmonella. This just weeks after the same warning for pistachio nuts, and peanuts earlier this year and last.

The FDA reports that 31 cases of food poisoning with the Salmonella Saintpaul strain have been reported in Michigan, Minnesota, Pennsylvania, South Dakota, Utah, and West Virginia. The warning is for raw sprouts, which authorities believe are harboring the bacteria in their seeds, so washing the spouts will not make them safe. The good news is that only the alfalfa variety seem to be contaminated; all other sprouts appear to be fine.

The FDA believes that this current contamination is an extension from an earlier outbreak this year that was reported in Nebraska, South Dakota, Iowa, Kansas, and Minnesota.

Well, another food, another contamination. It seems that food safety is a real issue today, and thankfully the government is making this a top priority. Congress is currently discussing setting up a new food safety agency with more resources than the FDA has. If it tightens up the controls on food quality, I’m all for it. I understand that feeding the masses is a tricky biz, but letting this much contaminated food out onto the markets is just unacceptable. I’ll keep you posted, love children; but until I hear more, stick to the hemp paste.

One Response to Another Salmonella Alert