Pulitzer prize winning author Frank McCourt died today from complications related to the treatment of malignant melanoma. According to reports, McCourt was suffering from meningitis, likely resulting from the immune-suppressing treatments he was receiving for the deadly skin cancer.

An Irish-American born writer, McCourt won the Pulitzer prize in 1997 for his work, Angela’s Ashes, which propelled him into wealth and popularity. He was being treated for malignant melanoma for the past few years and was released from New York’s Memorial Sloan Kettering Center to recuperate. Two weeks ago he developed meningitis, an inflammation of the sheath covering the brain and spinal cord.

This recent death brings up the importance of protection and detection of skin cancer. I’ve just written an article on the importance of daily sunlight for people, but still we all need to be careful. Sun exposure in and of itself is not dangerous; it’s getting sunburned that can lead to skin cancer. Using a good sunscreen that protects against UVA and UVB rays is essential, and protecting exposed areas if sun exposure will be for an extended time is equally important. And sunbed tanning is for the unwise, as it increases the risk significantly.

When it comes to melanoma, males and Caucasians are most susceptible. 7,800 people will die in the U.S. this year, and 48,000 worldwide, from malignant melanoma. Melanoma is most common on the back in men and on legs in women (areas of intermittent sun exposure).

To detect melanomas, one may follow the ABCDE rule: 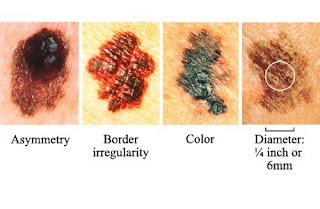 Rule D is a slight weakness in the method, as malignancies can be less than 6mm, but overall the ABCDE a good screening tool. If you are unsure about a spot or growth, don’t hesitate, get it checked out. People who live in sunny climates–Southwestern U.S., Southern California, Florida, Australia should be especially cautious.

In spite of all this, cancer treatments in general are risky. Since cancer cells share most traits with regular cells, just that they multiply uncontrollably, most treatments kill off all cells, including healthy ones. This can leave the patient immunocompromised, like Frank McCourt was, and thus susceptible to opportunistic diseases like meningitis.

So protect yourself, and get any unusual growths or discolorations checked out by an expert. In the meantime, give a minute of remembrance for a fine writer who will be sorely missed.