Can anyone guess which drug is being used most commonly by middle schoolers in Los Angeles? Not marijuana, no, no…it’s inhalants. And the number one inhalant of choice–you guessed it you aspiring dental students and rocket scientists–good ol’ nitrous oxide. Ha, ha, ha, ha…oh, ‘scuse me–laughing gas in the form of whippet cartridges. You know them; they are for whipping up cream, and they’re easy to get at gas stations, head shops and in other common household items.

Well California has had enough. From L.A. times: In response to reports from schools and law enforcement of increasing incidents, Assemblyman Tom Torlakson (D-Antioch) introduced legislation that would prohibit the sale or distribution of nitrous oxide, including whippets, to anyone under 18. The bill, AB 1015, has passed the Senate Public Safety Committee and is scheduled for a floor vote in August. 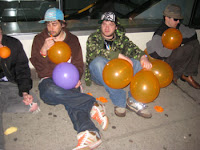 Why the big deal? Because whippets can cause irreversible brain damage and there have been a few reported deaths. Recently, three students at Madison Middle School in North Hollywood were hospitalized from allegedly abusing inhalants; and at Roosevelt High in Downtown L.A., a student who had been allegedly been huffing inhalants lost consciousness and had to be resuscitated. Over the 4th of July weekend, a Boyle Heights man was found dead, his closet filled with computer dust remover canisters (another source of inhalants).

Inhalants are used for their analgesic (pain killing), euphoric, and slight hallucinogenic effects. It is addictive. The dangers are that it can cause asphyxiation, short-term decreases in mental performance, audiovisual ability, and manual dexterity, deplete vitamin B12 causing deficiency, and cause nervous system damage. 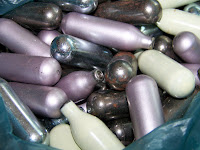 Here’s the gist: Parents of teen and preteen kids, be on the lookout for odd little metallic canisters and their plastic dispensers. See these lying around, and be sure your kid is huffing the laughing gas. Kids who love to club, rave, or whatever they might be calling it now, are likely to be exposed (in balloons filled with “nitrous”). Talk to your kids about avoiding this junk; it’s not benign; it can mess them up big time. OK, I’ll get off the soapbox now. Good luck.