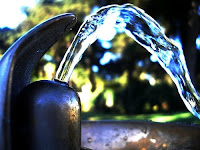 This just in: Thousands of schools across the country have been found to have unsafe drinking water. Contaminants have surfaced at both public and private schools in all 50 states–cities and small towns alike–including lead, pesticides and dozens of other toxins.

The federal government has failed to monitor water safety violations despite them multiplying over the last decade. The contamination is most prevalent at schools with their own water supply–wells, that is–which represent 8 to 11 percent of the nation’s schools. Approximately 20% of schools with water wells has violated the Safe Drinking Water Act over the last ten years, according to data from the Environmental Protection Agency (EPA).

The number of schools with violations is only a fraction of the country’s 132,500 schools, but it causes concerns since children drink more water per pound of body weight than adults do. Part of the problem is that the monitoring of drinking water in schools is spread too thin among a number of local, state and federal agencies. Finding a solution, experts and children’s advocates say, would require a costly new national strategy for monitoring water in schools.

Some of the findings from the EPA data include: 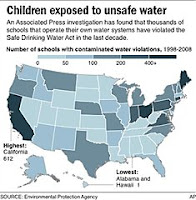 • Those schools and districts racked up more than 5,550 separate violations. In 2008, the EPA recorded 577 violations, up from 59 in 1998 — an increase that officials attribute mainly to tougher rules.

• Nearly half the violators in California were repeat offenders. One elementary school in Tulare County, in the farm country of the Central Valley, broke safe-water laws 20 times.

• The most frequently cited contaminant was coliform bacteria, followed by lead and copper, arsenic and nitrates.

It seems to me that this problem is only the tip of the iceberg. I point out in my book, The Six Keys to Optimal Health, that the nation’s public water system is a shambles. According to a 2003 National Resources Defense Council (NRDC) study, many community water systems (CWS) had the following problems:

It’s high time investigative journalists, like the ones at the Associated Press breaking this story, start reporting this mess with our nation’s water system. Water is the elixir of life–no living thing can survive without it–so it stands to reason that a faulty public water system is essential to our health and safety. Children in Minnesota and Seattle have already gotten sick from drinking contaminated water at their schools. At what point will the entire system come unglued and start causing a real public health hazard? I don’t know, but it’s one of those rare times I endorse the government stepping in, providing funds for the upkeep of this vast system, monitor all source water and its transportation, and shut down schools or any other building violating the Safe Drinking Water Act.

*If you would like to know more about your local drinking water, check here: http://www.epa.gov/safewater/dwinfo/index.html