Something Exciting About Anti-Depressants Got MRI? Get Surgery

Good news for medical marijuana patients: The Feds won’t be closing legal dispensaries anytime soon–as long as they comply with state and local laws. A fortunate development for cancer, AIDS and glaucoma patients, as there was some uncertainty on President Barack Obama’s stance on medical marijuana clinics. However, before all you plantar fasciitis suffering hippies and skaters get too overjoyed–the Justice Department says it will have no problem prosecuting dispensaries conducting illegal operations. DOH!

According to Justice Department officials, formal guidelines were sent on Monday in a policy change reflecting President Obama’s views that federal money should not be spent closing down medical marijuana dispensaries in states where it’s legal–which includes Alaska, California, Colorado, and Hawaii among the thirteen states in total. Patients and dispensaries were recently holding their breath as the Drug Enforcement Agency (DEA) conducted a raid on a dispensary in Lake Tahoe, California earlier this year. This coupled with the Bush Administration’s opinion that it could enforce federal law against marijuana, even above and beyond state laws had many in the industry worried. But President Obama said during his campaign last year that intended to halt raids of medical marijuana facilities operating legally under state laws. Hail Obama!!!

My regular readers know how I feel about this issue. Not only do I think Cannabis sativa (Mary Jane for you non-botanists) should be available for medicinal purposes, I think it should be legalized all the way around. As a recreational mind-altering substance, marijuana is bengn. The revenue that could be generated from the legal and controlled sales and distribution of this currently illegal drug would be highly useful. But hey, I’m odd–I also think prostitution should be legalized, you know? Go figure. 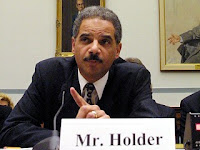 Anyway, Attorney General Eric Holder did make it perfectly clear that certain illegal activities revolving around the current medical marijuana industry will not be tolerated. These include:

Which I interpret to mean that the average citizen will eventually be unable to walk into a clinic, claim nagging elbow pain, and walk away with a scrip for Weed Brownies eaten once every 12 hours for the rest of your life. Sorry stoners, but I think that lid will be closed very soon…for now. But who knows–the way things have been going, my blueprint for a smoke-legal nation may just be on the horizon.