An over-the-counter weight-loss drug has been implicated in causing rare cases of liver disease, U.S. health officials said on Wednesday.  The drug, orlistat—available by prescription as Xenical, and over-the-counter (OTC) as Alli—has been reported in 13 cases of severe liver damage.  With some 40 million people worldwide taking the drug, a few experts think it’s not much to worry about.  But I do—I’ve been warning about Alli for well over two years, and now this.

Investigators are currently uncertain if orlistat is actually causing the liver disease or if there is just an association; some think there might have been a contamination, while others blame the problem on the “slower metabolism” of some its takers.  Heavens.

The FDA started a review of orlistat for possible incidents of liver damage in August 2009. That announcement followed reports of 32 cases of serious liver injury, including six cases of liver failure between 1999 and October 2008. Two of those cases occurred in the United States.

Most of those patients complained of  jaundice, weakness and abdominal pain—all signs of hepatic (liver) damage.  27 of the 32 cases were bad enough to require hospitalization.  The cases reported yesterday, were all rated 4 or 5 in the Drug Induced Liver Injury Network scoring system.  Said an FDA official, “Basically, a ’5′ means resulting in death or liver transplantation, and a ’4′ means it was severe and required hospitalization.”

I touched on this OTC weight-loss drug in my podcast on lifestyle drugs (Episode 3) in August 2007.  I said even then that the side effects looked harrowing, as the drug’s label warned against wearing white pants while on the medication, since Alli could cause an uncontrollable case of the runs.  Nice.

I asked the question then, “Would people really rather poop their pants than change their diets and go to the freakin’ gym?”  Dang!  And here we are two years later with “some people metabolizing orlistat differently” such that they are at risk for severe liver damage.  Again I ask, would you rather take that risk, regardless of how small, for something you can do on your own?  That is amazing to me. 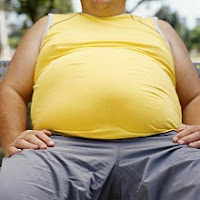 Anyone who reads this blog knows that I do not subscribe to the I-just-can’t-lose-weight-no-matter-what-I-try theory.  Bull pits!  That is a physiological impossibility, easily provable…yet not necessary, because, ultimately, it’s just an excuse.  I find it much more useful to either make the commitment, and then do the work, or just accept one’s obesity—LOVE IT!  Why choose severe liver damage over anything else?  Yes, you are going to die…so am I…so are the doctors who are telling you to take the diarrhea drug for weight-loss…we all are.  What makes you think one way is better than another?  At least you get to go out doing what you love—eating.  Beats dying with poop all over your white pants.

And to think, some experts are shrugging this off by saying it’s only 13 in 40 million.  What a freakin’ world we live in.