New York Yankees pitcher CC Sabathia is reporting to spring training 25 lbs lighter.  The secret: He kicked the Cap’n Crunch.  Aw yeh, the former fat-boy is weighing in at a svelte 290, not bad for a 6’7″ frame.  And to think he did it all with one simple change.  Just think of what that might mean for you or your kids!

Now back to Sabathia.  His one full box of Cap’n Crunch a day gave him a sugar equivalent of drinking 4 sodas, 25 teaspoons of sugar, or 38 sugar packets.  Nice, CC…nice.

*A report released in 2009 by the Rudd Center for Food Policy and Obesity at Yale gave Cap’n Crunch’s Crunch Berries the worst nutritional score of any cereal marketed to children and families. ~ from Wikipedia 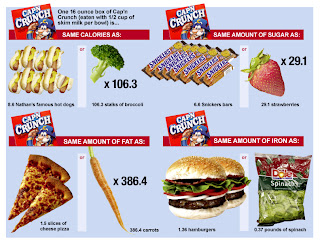 How about your kids?  Do they eat Cap’n Crunch?  Fruit Loops?  Frosted Flakes?  Do they drink soda?  These cereals and soft drinks have been staples in the American diet for the last fifty years, and it’s not because people aren’t consuming them.  It’s not just 6’7″ professional athletes eating this junk, either.  It’s little Timmy, and little Rainflower, and maybe even you.

Listen, next time you’re thinking about feeding Junior the Cap’n Crunch, why not just give him a Snickers bar?  Same amount of sugar as in a two-serving bowl of the Crunch.  And is it any wonder we are in the midst of an obesity (and diabetes) epidemic?

**Please watch the video below to get great perspective on the amount of sugar contained in a soda: