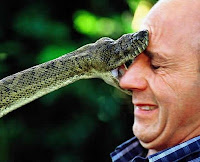 Good news adventurers, campers, hikers and rangers–a new ointment has been developed that can increase survival rates for those suffering snakebites.  The ointment contains nitric oxide, which has been found to delay the entry of snake venom into the blood stream.

Nitric oxide (NO), not to be confused with nitrous oxide (NO2) or laughing gas, is a chemical messenger in mammals.  It acts as a blood pressure and neurological regulator, and has been shown to lower blood pressure in stroke patients.  NO works by dilating blood vessels (vasodilator), slowing blood flow, and thus decreasing pressure.  It has also been found to slow down the pumping mechanism of the lymphatic system, which is the point of entry for many types of snake venom.  Researchers put two and two together, and came up with an ointment they thought should decrease the entry rates of the toxin into the human body. 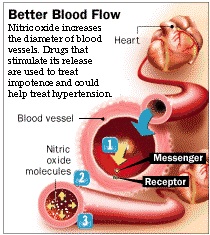 Bingo!  They were right.  In two experiments they showed that snake venom was slowed significantly in its entry into the mammalian blood stream.  In the first experiment the researchers injected a venom-like substance into one foot of 15 volunteers, and measured the time it took for the toxin substitute to reach lymph nodes in the groin.

They repeated the experiment, but rubbed the NO-containing ointment into the foot of the volunteer within one minute of the injection.  Amazingly, the transit for the venom-like substance went from 13 minutes to 54 minutes–a more than 4x decrease.

The second experiment looked at the survival rates of rats injected with snake venom.  The rats receiving the ointment continued to breathe 50% longer than rats receiving venom injections alone.

These findings are important as 100,000 people die worldwide every year from snakebites, while another 400,000 must amputate limbs that have been injected with poison. Godsend for snake charmers.

Currently, the most common treatment is to immobilize the patient and restrict blood flow as much as possible until medical assistance is available.


“These results point to a new method of snakebite first aid that may also be useful for bites to the torso or head,” the researchers concluded.

Finally, something snake-oil salesmen can be proud of.