Loss of Service, Love and Affection 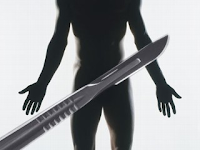 Here’s a curious case of circumcision whereby a man loses his entire penis to a doctor on a cancer trip.  Put yourself in someone’s shoes: You go to the hospital for a circumcision that’s supposed to help you with inflammation (??? new one for me, but I’ll roll with it).  You’re given your nighty-night nod by the anesthesiologist, only to wake up hours later sans member.  Doh!

Or…you’re a well-known and respected urologist, hired to perform a geriatric foreskin-ectomy, and given full permission to take control of any serious situation you come across.  During the procedure cancer is detected.  To save the life of the patient–you remove the cancer…one penis at a time.  Patient wakes up, checks what he thinks is the new chop top, and finds he has been removed from the club; wife’s even more pissed.  Who’s in the right or wrong?

Well, it’ll be up to the Shelby County Circuit Court in Kentucky, which will be entertaining the trial between Phillip Seaton of Waddy and his wife, Deborah, against Dr. John Patterson of Louisville.  The lawsuit alleges that Patterson removed Seaton’s penis without consulting either Phillip or Deborah Seaton.  The Seatons say they would have liked the opportunity to have a second opinion, and who can blame them?  They are seeking unspecified damages from Patterson for “loss of service, love and affection.”

The doctor’s attorney, however, states that his client had full authorization “to perform any medical procedure deemed necessary” and that the doctor found cancer in the organ during the surgery.  The attorney has said that Patterson “had no reasonable option” but to remove the cancer.  The Seatons’ attorney says the situation was not an emergency.

Interestingly, Jewish Hospital, where the full-shaft circumcision was performed actually settled with the Seatons for an undisclosed amount.  Hmmm…maybe they know something we don’t…like ain’t no man scorned than he who wakes up without a penis.

So what do you think?  Case of irresponsible amputation, or modern medical heroism?  Should a doctor do what he can to save a life (even if not immediately urgent), or is it up to the individual?  It’s not very different from euthanasia or other medical dilemmas.  I know what I think, but I’m curious to hear other peoples’ opinions.

3 Responses to Loss of Service, Love and Affection