How’s this for random and weird?  Three people have died this year from a brain-eating amoeba—Naegleria fowleri—a microscopic organism found in warm fresh water like lakes, rivers, hot springs and soil.  The victims include a a 16-year-old Florida girl, who contracted the infection from swimming in a river, and a 9-year-old Virginia boy, who died a week after he went to a fishing day camp, and a 20-year-old man in Louisiana, who died after using a neti pot–a teapot-shaped device used to run salt water through the sinuses to relieve allergies, colds and sinus troubles.

N. fowleri usually enters the system through the nasal passages, very often from jumping or diving into water.  The amoeba then makes its way up to the brain where it digests brain cells, killing the person within two weeks.  The disease is called primary amebic meningoencephalitis, or “PAM.”

Although a harrowing fate for the inhaler, N. fowleri does not actively seek out human brains; it really is a bacteria-consuming parasite.  But, like all of us, it will consume what it can until it finds the meal of its choice–to the great misfortune of the human unlucky enough to inhale the microscopic blob.

This illness is extremely rare–only 120 reported U.S. cases (almost all of them deaths) since the amoeba was first identified in the early 1960s, according to the Centers for Disease Control and Prevention (CDC).  The annual incidence of infection (and thus deaths) is three per year.

Brain-eating amoebic infection seems to be confined to the south, where all three victims this year contracted it.  The neti pot case is especially weird, as the parasite tends to live in warmer waters.  It also brings up some useful precautions one should take at all times when swimming in fresh water lakes and rivers in the south, or when using a neti pot.

Lake and river swimmers should hold their nose shut or use nose clips to prevent water being forced up the nasal passages.  And neti pot users should always boil and sterilize the water before running it through the nasal passages.  By following the instructions on the package of the neti pot, users will be most safe. 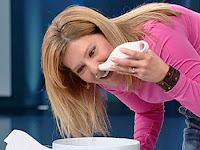 It’s a tragedy for the families suffering the loss of their loved ones to something as random as an encounter with a rare amoeba.  But it should remind us all to take precautions.  I will admit, though, I probably wouldn’t have considered running into a brain-eating amoeba while filling my neti pot, either (although I also have no desire to use one of these–not against it, just not interested).

I think the most important thing is for people to be aware; so perhaps the CDC needs to make one of those public service announcements (PSAs) and show it as summer begins every year.  Saying that, we probably will still see three deaths a year.  N. fowleri probably hasn’t survived for this long without having a few tricks up its flagella.