Easy Ain’t Always What it Seems 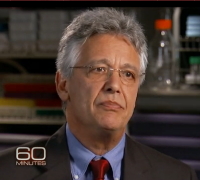 60 Minutes did a great piece over the weekend on the business of depression–that’s right, BIG business–and whether the product that’s being sold to America (and the rest of the western world) is actually doing what it’s supposed to. Some experts (myself included) believe that the popular (read: highly prescribed) depression drugs–the selective serotonin reuptake inhibitors (SSRIs)–don’t do a whole lot for people that are moderately depressed, and the data seems to back up that notion.

However, antidepressants continue to be some of the most prescribed drugs in the U.S., and most of those people fall in the center of a bell-shaped curve. In other words, most people taking antidepressants probably aren’t getting much from them, as Harvard psychologist and researcher, Irving Kirsch articulates in the video. According to his research, many of the studies that show antidepressants not doing much more than placebo have been hidden by the manufacturers who lead the studies.

We call this selective publication, and I’ve been reporting on this phenomenon within the antidepressant manufacturing industry for over four years. In 2008, research showed that only one third of the studies conducted on SSRI antidepressants ever made its way out to the public. Can you guess which third gets published?

In the 60 Minutes piece below, you’ll see Dr. Thomas Laughren, FDA Director of the Division of Psychiatry Products rationalize why it only takes two favorable studies–even if ten come back unfavorable–for a drug to get approval by the FDA. Oddly, he doesn’t mention “cha-ching $$$” anywhere in the piece. Hmmm…

Listen, I’m all for big business–a capitalist to the core–but there’s something wrong with pushing a drug onto millions of people, including children as young as six years old, when it isn’t doing exactly what it’s supposed to. And I wouldn’t care except there is also evidence that some of the side effects aren’t benign, or whether they are permanent. And that’s playing with people’s lives.

Again, I do not pull the public out of the equation because too many people are looking for an easy way out–and antidepressants sure promise that. Watch the piece below to see why easy ain’t always what it seems to be.

2 Responses to Easy Ain’t Always What it Seems