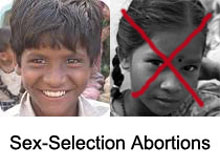 Oooooh…somebody’s arse is in trouble. Looks like some doctors in Britain might get pinched for approving abortions based on the sex of the unborn child. Heinous! And in the U.K. sex-selective abortion is considered immoral, and it’s illegal. Duh!

According to British newspaper, The Daily Telegraph, which claims it has hidden video footage (watch below) of doctors in three different clinics offering to falsify paperwork for women, allowing them to get terminations based on gender. Undercover newspaper reporters accompanied women to nine clinics throughout the country, where doctors in three of those clinics took the bait. The doctors agreed to arrange the terminations even though the woman claimed she did not want the baby due to its sex, the Telegraph disclosed.

Abortions in Britain are allowed only in limited circumstances, including when the pregnancy presents a serious mental or physical health risk to the mother and if there is a high chance the child would have severe disabilities.

Well ain’t that a mo-f*&#%-er. Kudos to the Telegraph for uncovering this ugly practice. As the father of two daughters, and a lover of women (and all people for that matter), I hate this practice. Because as far as I understand it, it’s usually female babies that are unwanted. Along with sex-selective neonaticide, which is the killing of newborns (most commonly practiced in areas where male children are considered more valuable, especially in parts of People’s Republic of China, India, Pakistan, Korea, Taiwan, and the Caucasus), this is one of the most prehistoric remnants of mass cultural ignorance due to educational, political and financial disempowerment of people. When people do not have the educational resources, and/or they live in a caste (sometimes class) system, whereby they see no financial future of a female child, then yes, some are going to take part in aborting females.

In 2005 90 million females were “missing” from the expected population in Afghanistan, Bangladesh, China, India, Pakistan, South Korea and Taiwan alone, and suggested that sex-selective abortion plays a role in this deficit; and India’s 2011 census shows a serious decline in the number of girls under the age of seven. Activists believe that 8 million female fetuses may have been aborted between 2001-2011.

Again, I can tell you that I abhor the practices of sex-selective abortion, neonaticide and infanticide (killing of children, which was the preferred method of sex-selectivity before the advent of diagnostic ultrasound). And don’t even think the practice won’t continue on a different level once genetic engineering technology hits the back alleys. Heck, it probably won’t even need to get that seedy, seeing as fancy-schmancy doctors in the U.K. are willing to do it through abortion today. Times might be changing, but some things seem to stay the same.

3 Responses to Ugly Practice of Sex-Selection Uncovered in UK