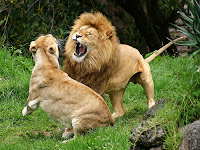 Sleeping on the couch tonight? Not speaking to Mr. Right? Don’t worry: that fight you and your spouse got into last night is actually good for your health. That is, if you don’t hold it in, but instead let your feelings be known. So says a new study tracked 192 couples over a 17 year period.

Researchers at the University of Michigan looked at how suppressed anger and feelings of resentment in a marriage affect overall mortality rates. They found that couples that suppress their anger–that is, neither spouse stood up for themselves during a spat–had twice the mortality rate than couples with at least one partner who let loose. Previous studies have shown that suppressing anger increases stress-related illnesses like heart disease and high blood pressure. Ernest Harburg, lead author of the current study said, “The key matter is, when the conflict happens, how do you resolve it? If you bury your anger, and you brood on it and you resent the other person or the attacker, and you don’t try to resolve the problem, then you’re in trouble.”

Amen Brother! That’s why my wife and I deliberately beat the crap out of each other (verbally, Romans, verbally) every month. Good for the health I tell ya. I’ve always said: Hold on to that anger and you’re just asking for a heart attack, or cancer, or something like that. Pent-up anger and resentment forces one to brood, causing chemical cascades like the over-production of cortisol and other chemicals, which can stress the organs and blood vessels. Over time this can lead to heart or vascular disease, and ultimately, premature death.

There’s this notion in our current society that anger is “bad”. But in truth anger is experienced by every person on the planet at some time or another. When one tries to put forth the illusion that one never gets mad–you know, the classic anger suppressor–then that person is inviting disaster. This doesn’t mean that you have to lose your cool at the drop of a hat–diplomacy and civility still have their place in our world–however, if you gotta get it out, then express yourself; you’ll certainly feel better, and you might just live longer as a result.