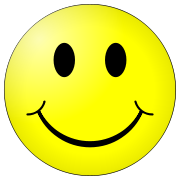 As far as emotions go, happiness is highly overrated. Some pseudo-scientists (read: psychologists), however, feel that the pursuit of happiness is a worthwhile endeavor. Take, for instance, the latest study out of Rotterdam’s Erasmus University in the Netherlands which links happiness to health. According to its lead author, happiness is the key to a long life. Hmmm…I’m skeptical. Here’s why:

The study looked at 30 other studies (a meta-analysis) which were carried out worldwide over periods ranging from one to 60 years. The results were that “feeling good could lengthen life by between 7.5 and 10 years.” In fact, it compared the effects of happiness on longevity to smoking on life expectancy.

Oy vey. Does anybody besides me see the nonsense in this junk science? First off, there is absolutely no such thing as a life of perpetual happiness. Every living being experiences unhappiness, loss, challenge, and so forth, at various times in their life. Life is a constant stream of varying psychological and emotional experiences. Even the human predicament of dissatisfaction is a necessary component to personal growth and development. Actually, it’s the pursuit of perpetual happiness that leads to the inordinate amount of depression in our society. The people who choose this pursuit get let down again and again because they are chasing the unattainable. No wonder antidepressant use is beyond comprehension. The people who chase happiness the most tend to be the most unhappy, and more importantly, the most unsatisfied people in society. Just an observation.

I’m sure you won’t find this surprising but the lead author of this study, Mr. Ruut Veenhoven, is a psychologist. The psychology profession stands to gain the most from putting forth the illusion that we can measure, and ultimately reach, a “state of happiness”.

Listen, happiness exists, no doubt. But it’s certainly as objective as beauty is. A Laker win might make me happy, but that sure as hell doesn’t have any lasting effect on me. So whether or not that’s going to have an effect on my health or longevity is simply ludicrous. In fact, it directly contradicts an earlier study that showed women end up more unhappy than men later in life, despite the fact that they generally live longer.

So striving for perpetual happiness, in my opinion, is futile. Fulfillment, however, is worth striving for; and this, like happiness, is completely subjective–so we aren’t going to be able to measure it any better. Veenhoven’s study discusses hedonics–the branch of psychology that studies pleasant and unpleasant sensations and states of mind, as well as the economic method of estimating demand or value. But this concept, like the entire measuring happiness thing, is flawed. According to critics of this pleasure measuring statistical regression, it’s “impossible to measure the immeasurable”, specifically because what makes an individual or society happy (or fulfilled) changes all the time. Well, no duh..uh..uh..uh..uh!

So I reiterate my earlier thought, the group most benefiting from this nonsense is the psychology profession. Not surprising since they are the professionals that strive the most to help people become happier. But I think the whole concept is bunk. You just can’t put a measure on happiness, and you certainly can’t link something that subjective to health. We need both happiness and sadness, challenge and support, pain and pleasure to grow and develop–it’s part of human evolution. But wouldn’t you expect psychotherapists to push the one-sided ideal of a happy life? Makes good business sense, anyway, don’t you think?