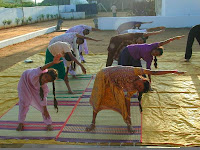 India’s health minister has an answer to universal health care–it’s called universal yoga. That’s right, the top-dog in the Indian health policy wants all schoolchildren to practice real health care. He wants them doing asanas. Nice. And the rational is that yoga helps prevent conditions such as diabetes and hypertension. Now that’s progressive.

Anbumani Ramadoss, the current Indian health minister, said he would make yoga mandatory for all school-going children, “There should be extensive scientific deliberations on yoga,” he said, “And today I blatantly put that yoga reduces diabetes, yoga reduces hypertension, yoga reduces stress.” True, true, but not all parties agree. The Muslim Malaysian Council or Malaysia’s National Fatwa Council, has sparked protests claiming yoga will steer people away from the religion, causing them to use Hindu prayers, which are considered blasphemous. As a result, the council has put out an edict (fatwa) against practicing yoga. The council also outlaws “gay sex” and women wearing trousers. Holy moly…how primitive.

Well, the religious controversy aside, I think this is one good policy. I’m usually against mandates, but if you’re going to have one, make it yogic. The Indian government could probably do just as well by making it a part of the school curriculum. This will help in a country where diabetes rates are highest in the world–41 million cases in 2007 and counting, and estimates hitting 70 million by 2025, according to the International Diabetes Federation.

Ah, the perils of modernization. Sometimes it’s good to get back to one’s roots–especially when those roots are so good for the body, mind and spirit. Maybe we can take a page out of that health book here in the U.S., and add that to our promised universal health care plan. At least the addition of state supported yoga might actually make a difference.

*Want to know how to do some basic asanas (yoga postures)? Check out this great yoga site here.