Nobody yet is pushing real health care reform, one where actual health enhancement finds its place in a national bill. Why not, you may ask? Because it’s a political and money game being sold to the public as concern for the greater good. Sure it’s about people…suuuuurrre!!! That’s why all the big money players are positioning themselves like never before. Insurance companies, pharmaceutical companies, AMA–all former opponents to universal health care are now on board hoping to get it all into place. Think there’s some money to be made? 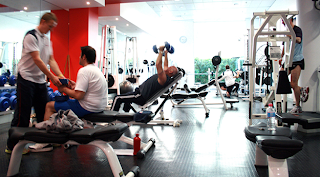 I wouldn’t be against this whole sham if I didn’t know that it isn’t going to change a thing that’s worthwhile. Same old medicine, same old s@$#. Findings like the one in the title of this post get a quick mention and then back to, “how can we sell more drugs, surgeries, procedures, politics, bull turds…?”

Here’s how: The latest findings came from a study out of Finland that looked at more than 2,500 men and their exercise habits for one full year. They followed up with the same men sixteen years later. They found that the men who exercised the most–not sissy exercising, either; intense exercise, stuff that made them sweat–were half as likely to develop cancer than the men that exercised the least. The researchers attributed the lower cancer rates to an increase in oxygen consumption. The cancers most reduced were of the stomach or intestines, lungs, prostate and brain.

I find this study very exciting. To me it makes real sense as to where our focus should be. But guess what: I’M ALONE! Nobody, and I mean nobody (OK, besides former Health and Human Services Secretarial Nominee, Tom Daschle) is looking at this information and realizing where health care needs to go to become “affordable”. The big sham is thinking that if we all pick up the tab for those who choose to not exercise, not lose weight, not get off heavy duty drugs (both pharmaceutical and recreational), not moderate their alcohol intake, not eat well, not get chiropractic care, not fix their relatively minor physical problems before they become major ones, and so forth, then everything will be alright–and cheaper in the long run. What a frickin’ joke.