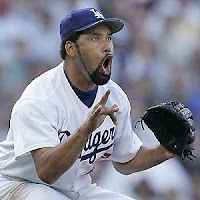 It’s Lima time no more.  Former Major League Baseball pitcher, Jose Lima was found dead at 6am this morning, an apparent victim of a cardiac arrest; he was 37.

The man famous for his on-field antics was found collapsed at his home by Pasadena paramedics at 6am Sunday morning.  His family says that he exhibited no signs of ill health, and he was out with them Saturday night and dancing later that evening.

Lima played thirteen years in the Major Leagues, pitching for Detroit, Houston, Kansas City and the New York Mets.  He pitched for Los Angeles in 2004 (his only season with the team), winning thirteen games and giving the Dodgers their first playoff victory since 1988.  Although often despised by opponents, teammates learned to love the high-energy hi-jinx of Lima, as they realized that was truly who he was.

“He was a showman, a hot dog. But he’d win games; and I think a lot of times, it wasn’t his ability but his ability to will himself to do it,” Dodgers Manager Joe Torre said. “In talking himself into it, I think he sort of intimidated some of the opposition too.”

Lima last season in the Majors was with New York in 2006.  He did a stint with some minor league teams, including Long Beach in 2009, with the hopes of being picked up by a big league club.  His agent Dan Evans told the Los Angeles Times, that despite being a tough transition for most players, Lima actually embraced it.

He is survived by his five children and a brother, Joel, a Dodgers minor league player, the Dodgers said. He was divorced.

Well, you know what I think when young people drop dead of cardiac failure…cocaine.  There I said it.  I hope I’m wrong, but in the absence of some unknown heart dysrhythmia, drugs are probably to blame.  As an athlete, it’s unlikely that he had coronary disease.  With five children, a divorce, and end to his baseball career…well, it’s the most likely candidate in my estimation.  Call me crazy.

Anyway, an autopsy will be performed shortly, and the cause of death should be uncovered then.  Either way, we’ll miss Jose Lima–players like him make the game fun to watch.  RIP Lima Time.