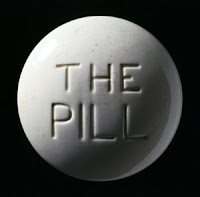 But wait–it’s not all cake and champagne for the Pill. Recent reports say that the Pill may lower sex drive in women who use it. Doh!

That’s right, a recent study out of

Germany showed a relationship between oral contraceptives and loss of libido. The study, published in the May 4th issue the Journal of Sexual Medicine, looked at more than 1,000 female medical students in Germany found that women who used hormonal methods of birth control–mostly oral contraceptives–had lower levels of sexual desire and arousal than women who used non-hormonal methods like condoms or no contraception at all.

Coming from a questionnaire assessing sexual function, the study does not show a causal relationship between using the Pill and lowered sex drive, it merely shows an association. Further studies will be needed to determine if the hormonal changes caused by the Pill actually lead to decreased female sexual desire. 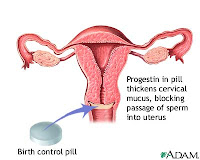 During a woman’s menstrual cycle, hormones fluctuate, causing sexual drive to ebb and flow along with them. At ovulation, sexual desire is at its highest. The Pill blocks ovulation with a surge of hormones, fooling the body into thinking it’s pregnant–no need to ovulate if fertilization has already occurred.

Researchers believe that free circulating testosterone is responsible for sex drive in women. Although still uncertain of the connection, testosterone has been shown to relieve a form of female sexual dysfunction called hypoactive sexual desire disorder (HSDD). The Pill, think researchers, affects the circulation of free testosterone in the blood, leading to loss of libido.

Several criticisms of the study point out its limitations. First, study participants were asked only whether they were in a stable relationship, not how long they had been in a relationship. One critic points out that it is well known that sexual frequency and desire tend to plummet over time. Kim Wallen, an Emory University professor of psychology and neuroendocrinology, says:

“We know that long-term relationships increase the risk of female sexual dysfunction–a condition easily treated with a new partner, which is many times more effective than any drug or hormone.”

Word to that, Kim Wallen. Another weakness of the study is that is was observational and not controlled. Women were not assigned methods of contraception, they had already chosen them. There could be an underlying predisposition for women with lowered sex drives to choose oral contraceptives over other methods of birth control.

Finally, some believe that characterizing lowered sex drive as a dysfunction is erroneous, as it may simply be relational. Hmmm…I’d have to agree with that one. Some people want it more than others, no doubt. But as far as correlations go, I think this is an interesting one. What they’ve got going for them on this study is it was the largest of its kind to look at this question, and it took a homogeneous group–German women of the same age, educated, and relatively healthy–and found an interesting correlation. I think the scientist may be on to something here.

Anyway, I think this whole deal has a sort of ironic twist to it, don’t you? No better way to prevent pregnancy than not doing it. I guess in that regard the Pill has hit its mark. Happy Birthday Pill.