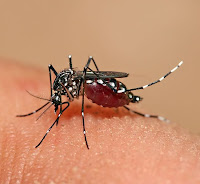 Check out this latest technological Pandora’s box—genetically modified mosquitoes to fight dangerous tropical diseases like dengue fever and malaria.  Sounds great right?  Not for everyone, as opponents to genetic tampering see potential problems stemming from the disruption of nature.  Hmmm…let’s investigate.

In a recent experiment, scientists released 3 million mutant male mosquitoes on the Cayman Islands to mate with wild female mosquitoes of the same species.  The male blood suckers were sterilized through genetic engineering techniques which altered their DNA.  The rationale was that sterile males would compete with fertile males reducing the number of mosquito offspring, and thus leading to reduced cases of dengue fever, a potentially fatal febrile and hemorrhagic disease, affecting 50 million people worldwide every year.

Dengue, spread to humans by the Aedes (Stegomyia) aegypti mosquito, is said to put some 2.5 billion people, two fifths of the world’s population, at risk, and is now endemic in more than 100 countries.  By controlling the numbers of mosquitoes in any given area, the number of dengue cases, theoretically, should go down.  The experiment did in fact reduce the mosquito population by 80% in the study area (40 acres), as compared to neighboring areas where no sterile mosquitoes were released.  It was difficult to determine, however, if actual cases of dengue decreased due to the small study area; yet researchers do believe that the reduced number of mosquitoes should lead to a direct reduction of the disease, and potentially reduce incidences of other worldwide endemic diseases like malaria.  Makes sense to me.

According to some, however, the environmental implications could be a nightmare.  Pete Riley, campaign director of GM Freeze, a British non-profit group that opposes genetic modification, states that we could disrupt the food supply of other species that may feed off the mosquito larvae.  Further, reducing mosquito populations could allow other insect species—which could be vectors for other, as of yet unknown, diseases—to flourish. Hmmm…this makes sense, too.

Riley correctly points out, “Nature often does just fine controlling its problems until we come along and blunder into it.”  True, Pete, true…can’t argue with that.  We certainly have an arrogant attitude when it come to our ability to understand and control nature.  Not that I’m against trying new things, but messing with the earth’s ecosystems can open an entirely new can of worms.  Not a bad thing; just be prepared, that’s all.

As a retort, Oxitec Limited, the Oxford-based company that created the sterile mosquitoes states that their recent product can’t permanently change the ecosystem because they only last for a generation.  But billions of genetically modified mosquitoes would likely be needed to stamp out dengue in endemic areas like Asia and South America.  Sounds a like good business.

I’ve actually got no beef with this type of technology—I find it quite fascinating, actually.  But there will always be opposition to anything.  My philosophy is that we as humans are essentially problem solvers.  We strive to fix what we see as “wrong”.  Millions of people, often children, are affected by dengue fever every day—many fatally—so controlling the mosquito vector of dengue fever seems like a good idea to me. 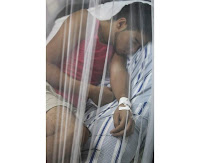 So I’m all for ecological conservatism, but not at the expense of human suffering.  Sorry deadheads—chill out.  We’ll deal with the consequences of altered ecosystems when we need to—as we always do.  Until then, embrace the science.