By Dr. Nick Campos On March 22, 2011 · Add Comment · In Fukushima Dai-ichi nuclear power plant, physicists, public health, radiation, Randall Munroe at xkcd.com
It’s your choice–want to be scared, or want to be free…you decide.  But here’s the skinny on the radiation risk from Fukushima Dai-ichi nuclear power plant–very, very low risk of adverse public health effects.  The danger zone, as pointed out by physicists (sorry, not pseudo natural-health hacks) is ~ 50 km or 30 miles from the reactor.The following chart was graciously provided by Randall Munroe at xkcd.com.  Please educate yourself: 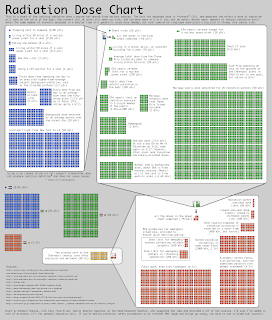 According to Ben Parr at Mashable:

We encounter sources of radiation every day, from natural background radiation to bananas. (Yes, bananas emit gamma rays, but you’d have to eat 5 million bananas in one sitting to get any kind of radiation sickness.) The absorption of this radiation is measured in units called the sievert (Sv). As the chart explains, we absorb approximately 0.1 microsieverts (μSv) of radiation per day from eating a banana, 10 μSv from background radiation and 20 μSv from a chest x-ray. That’s more than the radiation you’ll absorb from living within 50 miles of a power plant (0.09 μSv). Even a coal power plant generates more radiation (0.3 μSv) because coal has trace amounts of uranium.

It takes a lot more radiation to actually cause harm to a person, although, the maximum yearly dose permitted for a U.S. radiation worker is 50 millisieverts (mSv), more than 200 times the exposure received from a typical X-ray. It takes double that amount though (100 mSv) for an increased risk of cancer and a full 2,000 mSv for severe radiation poisoning to occur.

Fear comes from dis-empowerment, which results from ignorance.  When you are dis-empowered, expect somebody to come in and have power over you, thus the fear-mongers and charlatans capitalizing on your fears.  Educate yourself, and get empowered.  Don’t let fear run your life.

*Than you, Randall for an a$$-kicking chart–job very well done!