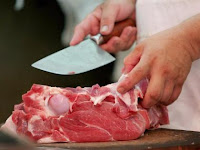 Hold on to your hats, peeps, but your butcher might be a chronic nose picker.  What?!?!  Yah man, diggin’ for diamonds…a snotter.  That’s because a new report says that half the meat and poultry sold in supermarkets may be tainted with the staph germ.

The Translational Genomics Research Institute in Arizona found that more than half of 136 samples of beef, chicken, pork and turkey purchased from grocery stores in Chicago, Los Angeles, Washington, D.C., Flagstaff, Ariz. and Fort Lauderdale, Fla. contained Staphylococcus aureus, a bacteria that can make people sick.  Even worse is that some meats were found to contain a dangerous antibiotic resistant strain, methicillin-resistant staph aureus (MRSA).  If ingested it could kill ya!  The study is being published in the journal Clinical infectious Diseases.

Staph germs are commonly found on the skin and in the noses of up to 25% of healthy people. The bacteria can be spread in many settings, including the packing plant or in the kitchen.  Although the bugs are killed during the cooking process, and can be thwarted with good ‘ol fashioned hand-washing, it still kind of grosses me out…how ’bout you?

The Centers for Disease Control and Prevention estimates that staph accounts for roughly 240,000 cases of food poisoning a year.  The researchers found MRSA in three of the 136 samples.  Food and Drug Administration (FDA) officials say meat does not seem to be a significant route for MRSA transmission, but health officials continue to watch and study the issue.  Scuse me while I puke.

The government doesn’t routinely check retail meat and poultry for staph bacteria; however, a two fairly recent studies showed their might be reason for concern.  One FDA pilot study in the Washington area looked at more than 1,100 meat and poultry samples and found staph in 280 of them. 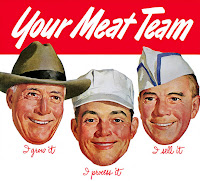 The other, a study out of Louisiana State University, looked at 120 meat samples and found staph in almost half of pork chops and 20% of beef steak samples. That study, published in 2009, calculated the superbug MRSA was in about 5% of pork samples and 3% of beef.  Is nothing safe?

OK, so well now I’m grossed out.  I’m certain that we should be relatively safe…but the rotating wheel of MRSA roulette–no matter how small the risk–is of concern to me.  Stay away from the roast, Grandpa…you’re vegan now.

The only way to really sum up this story is to note that the American Meat Institute says the study is misleading.  Of course it is….but check your butcher’s nose anyway?