What’s the leading cause of death among four to eight year olds?  Car crashes.  What did researchers at Yale University’s School of Medicine find that many children as young as 12 months were adept at doing?  Getting out of their car seat harnesses.  Bad, Jimmy, bad, bad…

More than 40% of children that can unbuckle their restraints do so while the car is moving, prompting parents to pull over, reprimand and then re-buckle the child, according to a recent study.

The study was based on 500 surveys distributed at pediatric offices in Connecticut and will be presented on Sunday to the Pediatric Academic Societies meeting in Denver.

The idea for the study came after researchers treated patients from accidents caused by the unbuckling and parents, distracted by their children, looking away from the road.  Ooh…

Researchers believe that better engineered seat belts or alarms might be the answer. 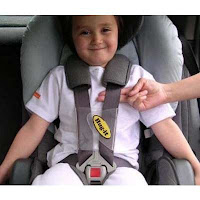 I have first hand knowledge of this happening, as my youngest daughter at two and a half is a regular Houdini. But I really didn’t realize how common the problem is.  My daughter also likes to roll down the windows–gotta lock those suckers, but sometimes she gets me.

All I can say is just be careful, parents.  I sure hope engineers get on this problem fast.  I hate to hear of children injured simply because they were wiggly worms.  Maybe handcuffs and a tank of water will do.  Fingers crossed.

*Here’s something I found through a quick search called the Hug-it Harness.  Can’t vouch for it, other than it looks good.  If any of my readers (especially in the U.K.) use this device, I’d love to know what you think.