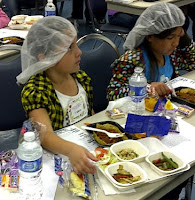 The following two posts are not for school districts or their lunch programs–they are for parents. I am writing these posts for individuals, not for the mass consciousness behind government programs. Although I fully understand the utility of mass institutions, like school lunch programs, particularly for people who’d rather not think or act for themselves, I happen to know that some people prefer to take care of themselves–that is, they appreciate certain qualities of life, like what kind of foods their family eats.

I don’t necessarily mean that as an insult, since we all have areas in which we would rather just have help than personally take the bull by the horns. But I am certain that people falling into this category with regard to their children’s lunches–those that would rather subject their kids to school lunches than prepare bag lunches from home–are going to be pissed off by what I have to say. Oh well…

It appears that school kids in Los Angeles are rejecting the new “healthy” meals they’re dishing up at L.A. Unified these days. The L.A. Times reports that the new menus introduced into the public school system as a part of the campaign to combat obesity, diabetes and other health problems has been a massive flop. Not only are kids not biting into the health food fare, but underground junk food markets are popping up at most schools, some even being run by teacher that feel sorry for the starving children. Crazy, I know…but can’t say I’m surprised. I’ll explain why. 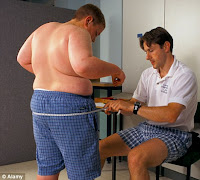 Who the heck would eat that stuff? I’m sorry L.A. Unified but that’s beyond stupid. Today’s children, raised on junk food, are not going to suddenly and drastically change their diets, even if First Lady Michelle Obama endorses that yuck. Wake up you brain-dead ideologues–I wouldn’t touch a black bean burger for anything, and I grew up eating healthy food. Sorry, that’s not healthy–it’s puke-inducing.  Listen to what the kids have to say about it

Iraides Renteria and Mayra Gutierrez don’t even bother to line up. Iraides said the school food previously made her throw up, and Mayra calls it “nasty, rotty stuff.” So what do they eat? The juniors pull three bags of Flamin’ Hot Cheetos and soda from their backpacks.  Yeah, no kidding. “This is our daily lunch,” Iraides says. “We’re eating more junk food now than last year.”

And it’s not just the type of foods L.A. Unified School Lunch Programs are serving, but the ways in which they are serving them. Reports are coming back from students and administrators alike of inedible food:

“The chicken pozole was watery, the vegetable tamale was burned and hard, and noodles were soggy,” said one 16-year-old

Other complaints included salads dated Oct. 7 being served on Oct. 17, although lunch program officials claim those dates were not for expiration, but instead “best used by”  dates. Either way, I don’t blame the kids—I wouldn’t buy that either. Who wouldn’t want food to be at its best?

As a result, student participation has been down–thirteen percent to be exact. And as an understandable backlash, the junk food black market has been booming. Students and teachers are coming equipped with candy, chips and even instant noodles to supply the hungry students.

So I reiterate that if children are raised on junk food, like most Americans are, and the food being served in school cafeterias is “like dog food” (according to one student), wouldn’t you expect them to reject it and go for what they know? Duh.

You can’t force drastic food changes on people, let alone children–that’s a recipe for disaster. School lunch programs could start by simply offering good quality foods. So keep the burgers and pizza, just make them with decent ingredients, and not the mass produced crap that large institutions typically purchase. I mean, my heavens, the school lunch budget increased a whopping 900% (from $2 million to $20 million)–start by buying fresh meat instead of frozen pre-made patties.

I like that L.A. Unified is attempting to make school lunches healthier, but serving Sloppy Quinoa-Joes ain’t gonna cut it. They’ve got to keep it within the comfort zone of the children. Fresh fruits and vegetables instead of canned or frozen is a good start, and I’m happy to report they have done that. But before introducing the same sort of yuck they serve at the Whole Foods hot deli counter…I’d invest in barf bags.