Prick up your ears, folks–a case of mad cow disease has been found in a dairy cow in California yesterday. Although authorities have stated that there is nothing to fear since no part of the cow entered the food chain (nor is the agent responsible for the disease transmissible through cow’s milk), this could have a major impact on beef exporters, as previous cases in the United States, Canada, Israel, Europe and Japan have caused disruptions to the global food trade worth billions of dollars.

According to the U.S Department of Agriculture, this is the fourth-ever case of bovine spongiform encephalopathy (BSE), otherwise known as mad cow disease–a disease fatal to cows and which can cause a deadly human brain disease in people who eat tainted meat–to be reported in the U.S. The last U.S. case of mad cow was in 2006, and the first in 2003 led to a $3 billion backlash against American beef exports. That episode led to a South Korean boycott of U.S. beef for the next five years. Mexico, South Korea and Japan are among the main export markets for U.S. Beef, with S. Korea alone importing107,000 tonnes of US beef last year, 37% of total imports of the meat, according to the agriculture ministry.

Experts claim that this case is atypical in that the infected cow contracted  the disease spontaneously, and not through the feed supply. Past cases are thought to have developed through the mixing of remains of other cattle in the form of meat and bone meal (MBM), which caused the infectious agent–prions–to spread.

In humans, the disease is contracted by eating the contaminated parts of an infected cow. The disease causing agent–a protein known as a prion–is lethal to neurological tissue. As it kills the nerve cells (neurons), empty spaces develop in the brain, causing a sponge-like appearance, and thus the name bovine spongiform encephalopathy (BSE). However, this is the name of the disease in cows. In humans it’s known as new variant Creutzfeldt–Jakob disease (vCJD or nvCJD), and it does cause the same neuro-degeneration and eventually death. 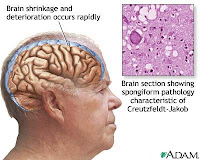 One real challenge of mad cow disease is that there is a long incubation time. Thus, cattle can become infected long before they show signs of the disease. This makes it easier for infected meat to enter the human food supply. Although the disease is contactable from eating muscle tissue–the typical beef products consumed in the U.S.–it is in higher concentration in nervous tissue such as the brain and spinal cord, as well as the digestive system, which are consumed more often in some other cultures.

This recent case is not thought to be a danger to humans as the USDA has assured the public that it has been contained. Some unknowns about the current case is whether the animal died of the disease and whether other cattle in its herd are similarly infected. The infected cow was identified through an Agriculture Department surveillance program that tests about 40,000 cows a year for the fatal brain disease. The name of the dairy where the cow died hasn’t been released, and officials haven’t said where the cow was born.

So it looks, for now, that the U.S. surveillance system for food safety has worked this time. Bravo to that! I don’t suggest getting alarmed, although if you are worried you can avoid eating beef for the time being. We should know more over the next couple of days, so keep your eyes and ears peeled.