Side Plank to Strengthen Shoulders and Abdominal Core 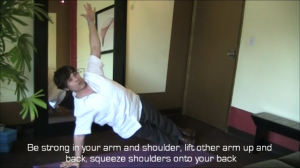 appy to be back from a much needed hiatus. I’m hoping you have been exercising, particularly planking. Planking seems to be a new-ish craze, despite it’s ancient yogic roots; and of this I am pleased, because if there’s gonna be a craze, may as well be something as powerful for your health and body as plank pose.

So this post is to show you the next level of plank pose, which is the side-plank. Remember that plank pose is an outstanding strengthener for the abdominal core–EMG studies have shown it to be one of the strongest contractions of the rectus abdominis muscle–so if you want a strong core and cut mid-section, then definitely plank, baby.

Side plank is similar, but now the difficulty is increased by going up on one arm and balancing. The transition from plank to side plank alone is a powerful strengthener, because you are taking a static position and now adding movement. It’s what we call “functional”- ity. Along with strengthening the core,both the plank and side plank will also strengthen the shoulders. Balancing on one arm adds proprioception to the mix, and thus you get an all around great challenger for the core and shoulder girdle. Yes, this should be a craze.

Watch the video below to get a glimpse on how to transition from a plank pose to a side plank…and then plank away, baby.