Plants Know When They’re Being Eaten! 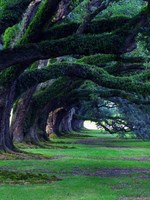 Heads up vegetarians—you’re eating living things. You know that, right? In fact, those living things—plants, vegetative life forms—have senses. Yes! And they know when they are being eaten—ewww…. This from a new study showing that plants can sense vibrations (see video below), they actually ‘hear’ themselves being chewed. I repeat, ewww… So brutal.

Researchers at the University of Missouri (MU) put caterpillars on Arabidopsis, a small flowering plant related to cabbage and mustard, and by using lasers and reflective material, measured the movement of the leaves in response to the chewing vibrations of the grazing larvae. They then played back recordings of the chewing vibrations to some plants and not to others, and they found that the plants hearing the chewing vibrations released more mustard oils—a chemical that is unappealing to many caterpillars—on subsequent feedings. Wow!

According to lead researcher Heidi Appel, “We found that ‘feeding vibrations’ signal changes in the plant cells’ metabolism, creating more defensive chemicals that can repel attacks from caterpillars.”

As a control the researchers also exposed the plants to different vibrations like gentle wind or “different insect sounds that share some acoustic features with caterpillar feeding vibrations,” explained study co-author Rex Cocroft, neither of which increased the chemical defenses. “This indicates that the plants are able to distinguish feeding vibrations from other common sources of environmental vibration.” Simply mind-blowing.

Heidi Appel (left) and Rex Cocroft (right) from the University of Missouri led the research.

Appel and Cocroft say future research will focus on how vibrations are sensed by the plants, what features of the complex vibrational signal are important, and how the mechanical vibrations interact with other forms of plant information to generate protective responses to pests.

This study fascinates me for a number of reasons. First it demonstrates what metaphysicians have claimed for millennia: all sentient beings express the same life force, and that force is expressed in the physical universe as vibration. Okay this may sound obvious to some, but there is at least one group that continues to deny Einstein’s mass-energy equivalence as having any relevant significance to the nature of consciousness (although they don’t classify it as such, as most keep as far away from consciousness discussions as they possibly can), and another group that takes an über self-righteous position on dietary practices. These findings show at the very least how nature uses vibration in a sensory manner, and also defensively for life preservation. Say the researchers:

“Plants have many ways to detect insect attack, but feeding vibrations are likely the fastest way for distant parts of the plant to perceive the attack and begin to increase their defenses,’ Cocroft said.

“Caterpillars react to this chemical defense by crawling away, so using vibrations to enhance plant defenses could be useful to agriculture,” Appel said.

And to the militant meat-is-murder set: looks like eating plants is murder too, by that type of irrationality anyway. Listen, if I’ve said it once I’ve said it a thousand times: Life begets life. We must eat living material to maintain our own existence. To vilify the consuming of one life form over another is purely nonsensical. All living beings vibrate at a certain frequency. You are not being more humane by consuming vegetation. Sorry. And this study shows exactly why: Plant life, like ALL life, wants to survive. Geez, it wasn’t that long ago that we humans were on the food chain. Playing the arrogant life-overseer who places judgement on the value of life forms is simply an exercise in egocentricity. Eat however you choose, but don’t berate those that eat differently on some feeble argument of being ‘more humane.’ Yeah right.

The other fascination for me is simply the intelligence present in all nature—the universal order if you will. If you haven’t read my pieces on Universal Intelligence or Innate Intelligence, please do so; I describe this order in detail so that you can better appreciate our profound connection to all things. This does not mean we refuse to take part in the process of life by renouncing the eating of living things. Duh! Instead it is to simply appreciate the magnificence that we are a part of, from the microscopic to the macroscopic. Appreciate life in its totality, and leave the foolish self-righteousness alone . So say the plants of the world—I know, they told me.