What’s the difference between a drug addict and a physician who’s a drug addict? Access. That’s right, while the numbers of substance abusers within the general population and among physicians is roughly the same—around ten percent—doctors are more likely to abuse prescription drugs. Obviously this is a scary notion if the doctor is in charge of life or death situations.

A measure to randomly test physicians was defeated in California last November. Experts believe it was due to an addendum for increasing malpractice policy limits, which opponents argued would increase health care costs for everyone. The plan would have mandated random drug and alcohol testing for physicians, overseen by the state medical board. Physicians could have been tested if they were suspected to be abusing substances or after an unexpected patient death or serious injury. It would have also required physicians to report colleagues to the medical board if they suspected impairment on the job resulting from substance abuse. If doctors tested positive, their medical licenses would be suspended, pending investigation.

Some of the facts revolving around physician drug abuse: 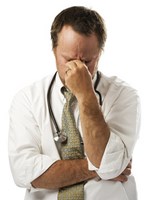 Since 2004, random drug testing has been in place for anesthesiology residents at Massachusetts General Hospital, and it appears to be working: During six years before the program was implemented, there were four substance abuse incidents, but not a single one since. Bravo!

To quell fears of police state tactics, it is important to note that punishment is not the purpose of the monitoring—it’s patient safety. With medical mistakes booming, it is important to reduce risk at every corner. It is also to get the physicians much needed help. Most states already have physicians health programs (PHP—*where above study results were gathered) to monitor participants, evaluate needs and direct treatment. A BMJ study in 2008 showed that 65 percent of physicians enrolled in PHPs remained free of substance abuse for five years.

Well I feel for these docs, I do, because I can only imagine the difficulty of kicking a habit when it is readily accessible. It is really too bad that they tried to bundle the malpractice increases within the mandatory testing, because I can see why that made the measure unappealing. Malpractice litigation is already out of control, and raising limits from $250K to $1.1 million, as the measure intended to do would have made it too easy for unscrupulous, greedy lawyers (the next group needing sails deflated) to abuse an already taxed system. Out of control malpractice litigation is one reason unnecessary and costly diagnostic testing has gone overboard. So, again,I can see why voters rejected it. Good move, actually.

But be on the lookout for mandatory testing in your state, because it looks like, despite the failure in California, it’s coming. And that’s a good thing for patients, and the doctors challenged by substance abuse. Patients should not be at risk from a surgeon nodding out during a procedure, and doctors should get the help they need, even if it comes against their will at the time. I am certain they will be relieved when all is said and done.