Obesity Goes Where the Money Goes 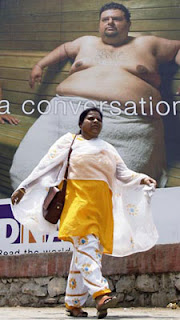 I wanted to address something I touched on last post–obesity as a condition of prosperity.  The obesity epidemic that we are witnessing today in western society is only possible in an environment of abundance.  I am not talking individual wealth here, but prosperity of nations; and American obesity statistics, and pretty much that of the rest of the world, support this claim.  Obesity is rampant in North America and Europe, with Japan and South Korea having the highest rates in the east.

But wait, what about the rising powers of China and India?  They are experiencing rapid economic growth, but have they an obesity epidemic?  According to a recent report, extreme fatness is making its way to India.  As India’s economy grows, the middle class increases as well, and western fast food companies are smelling opportunity like they haven’t since, well, 1950s America.

And which demographic do you suppose the fast-food industry is targeting?…You got it–youngsters.  Let’s go to the Hop… Reports disclose that one in three children in private schools in New Delhi are obese compared with one in ten in government schools. 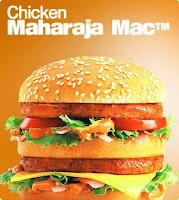 “Obesity is emerging in India which has serious implications for metabolic health in the future,” says researcher Seema Gulati. “Schoolchildren are attracted to the way it (junk food) is advertised,” she said. “They feel it is something that is high status. They want to try it out.”

Exactly…convenience, good taste, high status, western, bourgeois, you know…you’ve been there America, but now look atcha: 30% obesity in most states.  That’s not overweight…that’s obese…and it’s crazy.  And I’m certain the trend will continue in the East, as Asian countries get more powerful.

Brazil is there already, and India is on its way…China anyone?  We’ll see.  A major 2010 study called “The Rise of Asia’s Middle Class” by the Asian Development Bank warned that in the next 20-30 years Asia will be faced with “an increasing number of chronic diseases on a scale previously unseen”.

Obesity is a natural consequence of prosperity.  As money flows, so does the drive for convenience, and nothing more convenient than ready-made food for the go.  Wealth comes from work–lots of it–and this means limited time.  We Americans know that lifestyle all too well–the burning candles, chasing sensory stimuli and seeking greater and greater conveniences–and how it can lead to greater excesses.  Ultimately these excesses cause problems, like rising chronic diseases and epidemics of addiction: food, drugs, sex, and so on.

Hey I’m not knocking any of it…just pointing out the truths of the bigger picture.  We can waste time looking for new and novel causes of obesity–heck, lots of money to be made there–but if we really wish to make a dent in the obesity numbers, then understanding how the condition arises and develops over time is a hell of a lot more useful than trying to create new fantasies about genes and hormones, especially as we see it unfolding in other cultures mirroring our own.  Let’s put two and two together, find real solutions to help those that truly want them, and then maybe we might even pave the way for others to understand and resolve their own issues.  But it won’t happen anytime soon if we continue to foolishly blame outside forces when the problem is completely man-made.

2 Responses to Obesity Goes Where the Money Goes