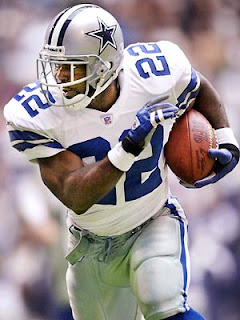 Just heard on ESPN’s Monday Night Countdown, the analysis show preceding Monday Night Football: NFL analyst and Former Dallas Cowboy running back (and Dancing with the Stars champ) Emmitt Smith giving current San Diego Charger LaDainian Tomlinson advice on how to bounce back from injuries and prolong his career, the wise Mr. Smith suggests trying chiropractic.Yes! You heard right. From one future Hall of Famer to another, chiropractic is the way to go to stay healthy, strong, and preserve one’s skills in a highly demanding and physically grueling sport.

Woowee! What a plug for chiropractic! Why am I so ecstatic? Because what we’ve mostly heard in the past about chiropractic from major media outlets has been less than gracious. But now a major sports star with mass appeal says on national television to go see a chiropractor, and I say bravo.

If you don’t know who Emmitt Smith is, suffice it to say that he is the NFL’s all-time leading rusher and three time Super Bowl winner. He’s a league MVP and a Super Bowl MVP. It doesn’t get much better than that. And Mr. Smith danced his way into the general public’s consciousness when, in 2006, he won the third season of Dancing with the Stars.

If you’ve read my book, The Six Keys To Optimal Health, then you know what Emmitt Smith has said about chiropractic, “After that season (where he was hobbled by a hamstring injury), I decided to invest in me, to keep me going.” He went on to say, “You can have a Ferrari body, but your wheels need balancing. I felt if I took care of my body, I could still function when I got older.” So Emmitt Smith chose chiropractic, and he’s encouraging LaDainian Tomlinson to do the same.

And I’m encouraging all of you to do the same too. If you want to live pain free, with proper biomechanical functioning, and optimal overall health, choose chiropractic–it works!